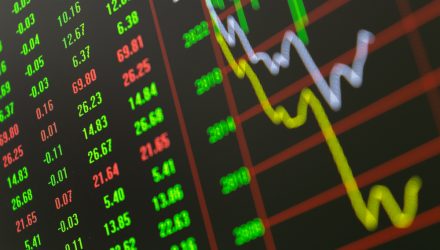 Stocks attempted to rally in the first half of the month but turned decisively down on August 19. The highly-anticipated speech by Fed Chair Jerome Powell on Aug 26, in which he reiterated his hawkish view on inflation (see Economic Update), reinforced the negative trend. The S&P 500 ended August down 4.2%. 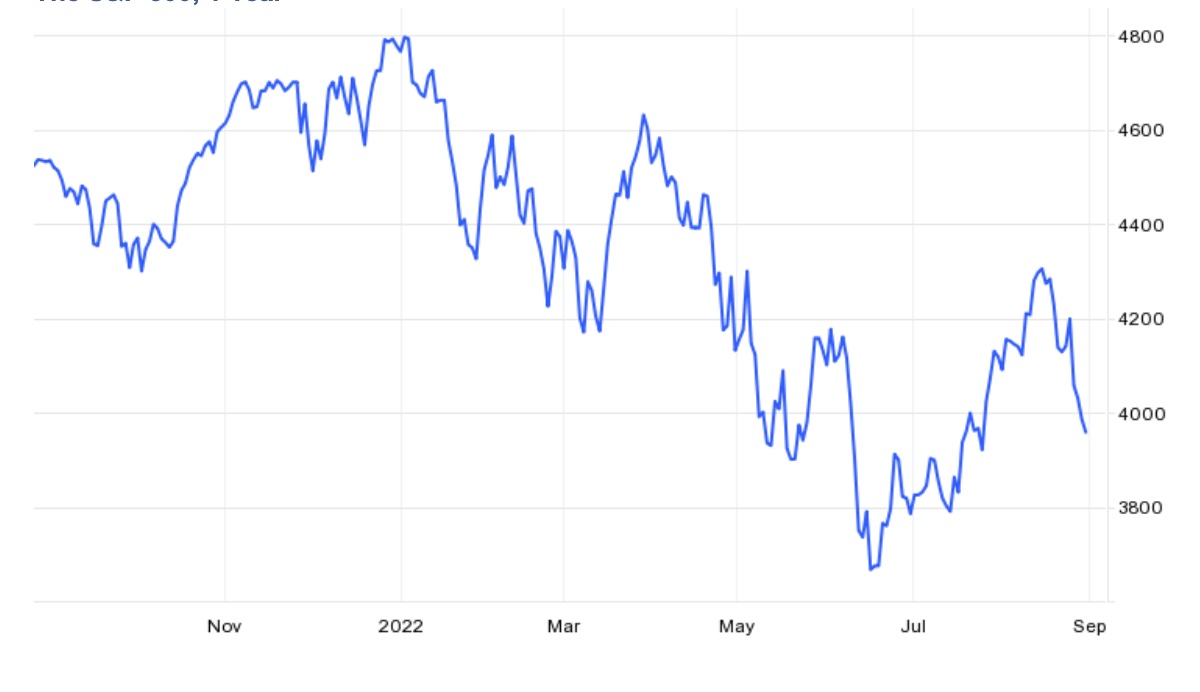 As I wrote in my last month’s commentary, the summer stock market rebound was based on hope that the Fed has won the fight against inflation. The rebound that lasted from July to mid-August, deemed a “bear-market rally” by many observers, was quite strong. It reversed around half of the market plunge of the first half of 2022. In the meantime, the Fed has been consistently hawkish since December of 2021 and its message has not changed one bit. So why such wide market gyrations – a 20% plunge in the S&P 500 in the first half of the year, the summer rebound, and now a resumption of downside?

Here’s the progression over the course of the year, in summary. More on each point below.

All Eyes on the Fed

After insisting that “inflation is transitory” during most of 2021, the Fed turned 180 degrees in December by adopting a hawkish message: it was now concerned about inflation and would combat it. It began acting on the message only in March of 2022 by raising its Funds rate by 25 basis points. Of course, this was too little, too late because consumer inflation had risen above 4% back in April of 2021 and kept rising unchecked, above 8% by March of 2022, its highest in over 40 years:

Fed officials likely realized by that time that they needed to take inflation seriously and fight it more forcefully. They increased their monthly rate hikes to 75 bps each, and quickly raised the Funds rate to 2.5%. Aside from a few months in 2019, the rate is now at its highest since 2008:

As with previous episodes of Fed tightening, this pricked the stock bubble. The market began to slide in January, right after the turn in the Fed’s message. The S&P 500 dropped 20% by the end of June, and the NASDAQ-100 plunged by almost 30%. Investors watched how the Fed, determined to control rising inflation, drove the market decline in the first half of 2022. Always forward-looking and in order to pinpoint the next market trend, they began to guess what the Fed would do next.

Has The Fed Killed Inflation?

The Fed’s tightening policies combat inflation, as well as slow down the economy. It appeared by early summer that the Fed’s tightening began to “work” in both areas. In caused an economic slowdown and broke the bull market in commodity prices. Nearly all commodities began to fall. For example, the WTI crude oil fell below $100 per barrel in July from its $120 peak in June: 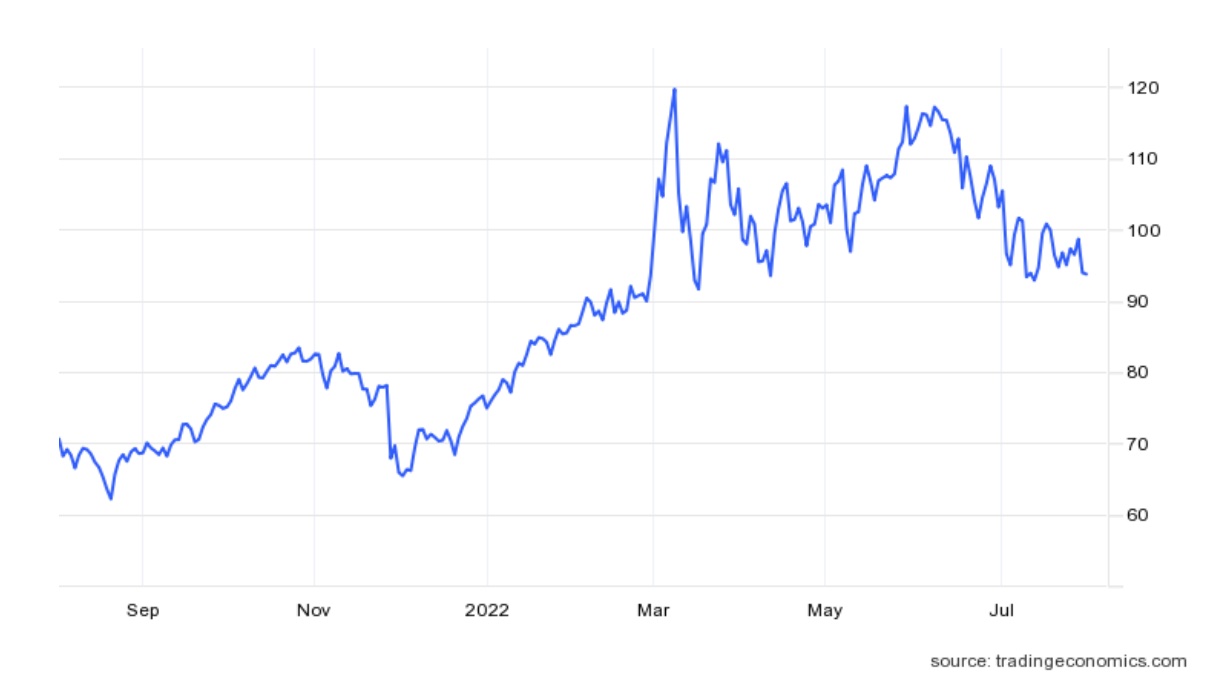 Copper, wheat and some other commodities experienced even sharper declines: 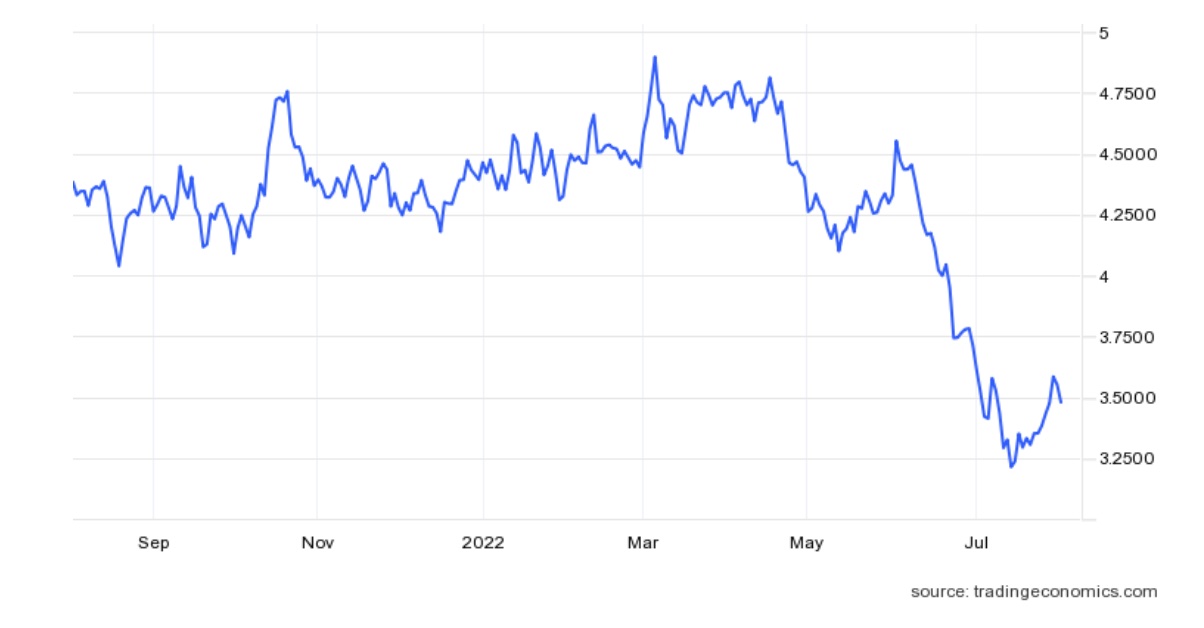 Inflation has been largely driven by energy and other commodities, and as described above, commodity prices peaked in June and begun to fall. Apparently, this suggested to many strategists that inflation should begin to ease shortly.

Meantime, bond investors seemed to have priced-in the same scenario. The 10-year Treasury yield fell below 3% in early July from its June peak of 3.5%, and subsequently reached 2.6% in early August: 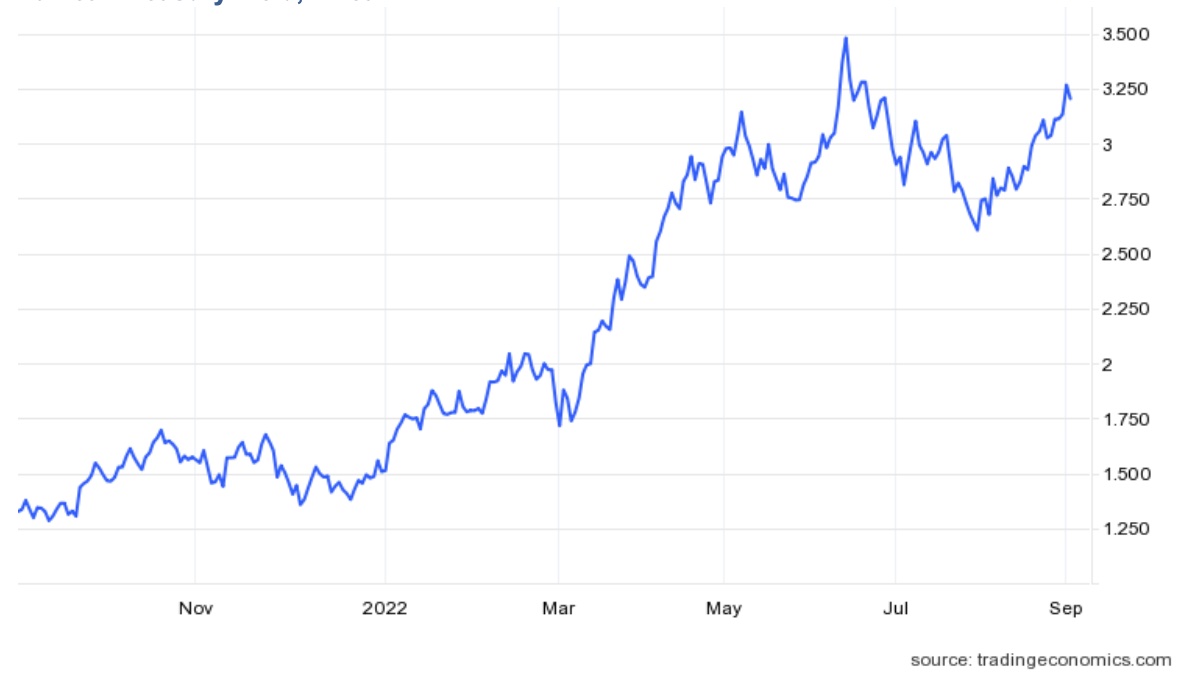 To summarize this phase, commodities and bond markets signaled by early July, correctly or not, that the Fed has won the fight against inflation. Of course, in addition to combatting inflation, the Fed’s tightening policies have a downside: they also slow down the economy, possibly to a point of a recession. Why risk causing a recession if inflation was under control? The Fed would clearly no longer need to continue tightening, investors thought. Investors were convinced that, with the Fed out of the way, a bull market in risk assets would resume. Anticipating significant upside, they rushed to buy stocks.

These investors’ hopes were mercilessly dashed by Fed Chair Powell’s August-26 speech in Jackson Hole. In it, he stated directly and succinctly that the FOMC’s focus is restoring inflation to its 2% goal, which “will take some time and requires using our tools forcefully.” He reminded that “another unusually large increase could be appropriate,” hinting at a third 75-bps hike in September. “At some point,” he said, “it likely will become appropriate to slow the pace of increases” – meaning more, maybe smaller, hikes!

And what about the economy? “Reducing inflation is likely to require a sustained period of below-trend growth.” (such periods include recessions, I add). This will “bring some pain to households and businesses” – again, clearly describing a recession. “These are the unfortunate costs of reducing inflation. But a failure to restore price stability would mean far greater pain.” In other words, it will be tough – deal with it.

Model Capital Management LLC (“MCM”) is an independent SEC-registered investment adviser, and is based in Waltham, Massachusetts. Utilizing its fundamental, forward-looking approach to asset allocation, MCM provides asset management services aimed to help other advisors implement its dynamic investment strategies designed to reduce significant downside risk. MCM is available to advisors on SMArtX Advisory, Axos Advisor Services, and Envestnet platforms, but is not affiliated with those firms.