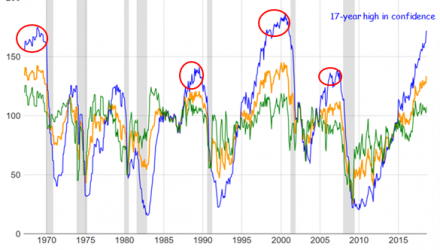 Consumer Confidence…As Good As it Gets?

INVESTOR CONFIDENCE… OPTIMISTIC BUT NOT EUPHORIC

Nine years into the U.S. economic rebound, we have reached a milestone: In 50 years, consumer confidence has only been higher once (1998-2000). The open question is how to interpret this fact. Is this a case where ‘good news is good news’ – a clear sign that we are far from recession and thus the cycle is healthy – or is this more a case of ‘good news is bad news’, meaning that things are now as ‘good as it gets’ as the market is pricing in good news for eternity and there’s nowhere to go but down?

We have historically used consumer confidence as a “Beware the Crowd at Extremes” condition, but it is only one indicator and, like valuation, is not a timing tool. A cursory read of the chart below may alarm readers, who correctly note that recessions tend to follow historic peaks in the chart. Our view is that, while this indicator is no longer supportive of US stocks, high confidence can persist for several years (see red circles on the chart below) and has tended to be positive for stocks during these periods.

In trying to judge the current stage of the global bull market, we have found the advice from legendary investor Sir John Templeton to be very helpful. He described four phases of a bull market’s lifecycle, saying they are “born in pessimism, grow in skepticism, mature in optimism and die in euphoria”. 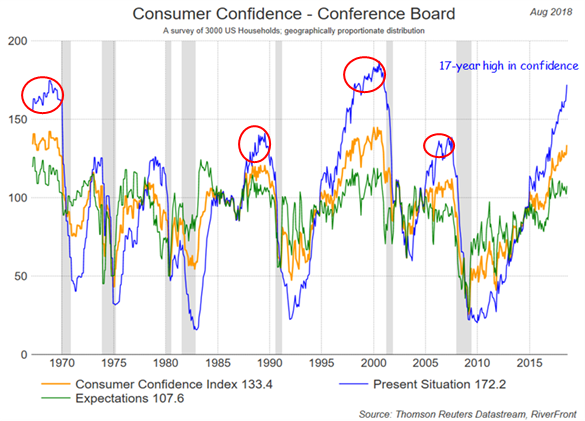 Phase I ‘Pessimism’: Economic and earnings news is bad, confidence is low, and stocks are cheap. Some remember well the pessimism of the second half of 2008 and early 2009. While bull markets are born in pessimism, the point of maximum pessimism, the beginning of the bull, is only known for certain in hindsight. Extremes are helpful in trying to gauge the bottom, but each cycle is subtly different, some more extreme than others.

Phase II ‘Skepticism’: Economic and earnings news is better, confidence is still low, and investors are reluctant to believe the recovery can last. What has distinguished this bull market for us has been the overwhelming and pervasive skepticism that accompanied the rise to and through the previous high-water mark on the S&P 500 at around 1600; from the lows below 700. We would argue that optimism in the US only appeared during 2017 as consumer confidence eclipsed the 2007 high and the global economy expanded in unison. We believe Europe, Japan and emerging markets have remained in “skepticism”, concerned with a multiplicity of issues. The bad news is that the international market’s inability to gather investor confidence has held these markets back relative to the US. The good news is that international stocks have delivered positive returns in line with long-term norms in the last 5 years and remain attractively valued.  We think they have better long-term return potential, but our tactical discipline, which focuses on price momentum and investor sentiment, favors the US in the short-term.

Phase III “Optimism”: Recovery is established, junk bond yields are low, confidence is high, and margins and valuations are above average. This is the phase we believe the US stock market is in today.  Successful and high potential growth businesses have lofty expectations built into prices, but generally valuations are at levels which are sustainable until the next business cycle downturn. We are not forecasting a recession, but we recognize that recessions take most forecasters by surprise and stock markets tend to anticipate a recession by 6-12 months. As we wrote earlier this year our advice is to “stay at the party but start drinking water”. (see Weekly View, 6.12.2018). The risk/reward in this phase is more nuanced. Optimism can last for several years, as it did in the 1996-1998 period and can deliver above average returns, but a 20-30% decline is typical in the subsequent business cycle downturn.

Phase IV “Euphoria”: Investors chose to ignore history and say, “this time is different”. Valuations go to levels from which the subsequent bear market involves substantial losses. Japanese stocks in the late 1980’s, emerging markets in 1993, US stocks in 1999-2000 and real estate in 2005-2007 are all examples of euphoric bubbles. We see pronounced optimism in some US tech stocks, and some euphoria around individual companies that are changing the business landscape, but generally we think euphoria is hard to find in today’s global stock markets. As we said above, we see more skepticism than euphoria, which we think means the global bull market in stocks has further to rise.