Heading into 2020, we had hoped that US-China relations would thaw, at least during the election year. As we discussed in our 2020 Outlook, we believed both sides had much to gain politically and economically by a ‘cease-fire’ from the trade war that was weakening the world’s two largest economies. In late December, the two superpowers signaled a near-term ‘détente’ by signing a ‘Phase One’ trade deal that unwound many of the tit-for-tat tariffs put in place over the fractious prior year.

However, we believe the force of the COVID-19 pandemic has served to further strain ties between US and China, creating a deeper level of mistrust and the early stages of an economic ‘Cold War’. ISI’s China Strategist Don Straszheim, one of our preferred experts on the region, stated in a research note from June 2 that “At no time in the last 40+ years have US and China economic relations been this bad and this dangerous.” What does this mean for the global economy and for stock markets? In this note we explore the major ramifications for the US, for China, and for RiverFront’s portfolio positioning.

China’s Isolation from the West is Growing.

As the epicenter of the world’s first COVID-19 outbreak, China was first praised and then roundly criticized for its handling of the epidemic. US officials led by the president have further stepped up the criticism, with officials suggesting in May that the virus may have emanated from a lab in Wuhan and labelling COVID-19 ‘the Chinese virus’. None of this anti-China sentiment is anything new for the current administration, which has made China’s trade imbalances with the US a central part of their platform since coming to power in 2016. Overall US-China trade has continued to shrink since 2019 (see chart, below), suggesting to us that the unwinding of tariffs is a superficial ‘band-aid’ on a deeper issue. 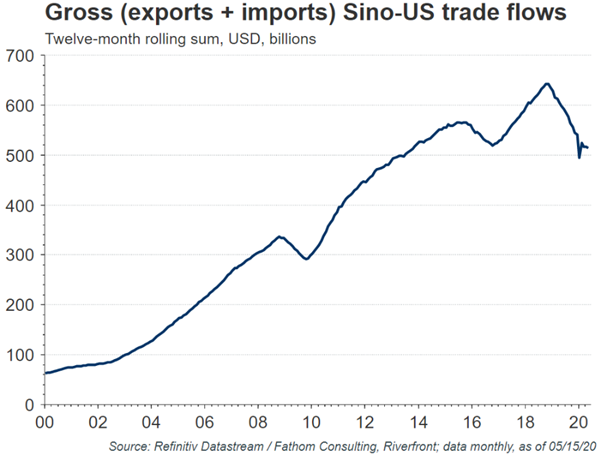 China: One Thing Republicans and Democrats Agree On.

The administration’s recent hardening line against China in an election year also reflects that anti-China sentiment is popular on both sides of the aisle. China has become the convenient villain for lawmakers looking to shift their electorate’s focus from problems at home to an external enemy. As Republicans have sponsored bills to protest China’s treatment of Hong Kong, Democrats have voiced their support – a rare show of bipartisanship in American politics. According to a Bloomberg article, Democratic Presidential nominee Joe Biden has recently described President Xi Jinping as a ‘thug,’ lauded protest efforts in Hong Kong, accused China of unfair trade practices, and highlighted human right abuses relating to their treatment of Chinese Muslims. In fact, some recent reports suggest that some in the Communist party may prefer to deal with President Donald Trump for another four years rather than Biden, who may be able to more effectively unite US allies against China.

Hong Kong: the situation and its implications.

China’s isolation is growing despite – or perhaps in part because of – its efforts to step in as global leader during the pandemic. China has been becoming noticeably more assertive recently on the world stage, by escalating tensions on a long-disputed border between India and China that turned deadly for the first time in four decades last week. Chinese relations with Taiwan are also at an ebb after a resounding re-election in January for Taiwanese President Tsai Ing-wen, who vociferously supports the concept of Taiwanese sovereignty from China.

We believe one of the most eye-opening events has been China’s move to derail its ‘one nation, two systems’ in Hong Kong, bypassing the island’s local legislative council and approving security legislation for the region. This move, which could squelch free speech in Hong Kong, has brought about fresh criticism from many western nations and a new level of rancor between the US and China. US officials are threatening sanctions for human rights abuses, which could come in the form of higher tariffs and a revocation of Hong Kong’s special trading rights. There is also the possibility that the US will work to limit investment in China, including the possible delisting of certain public Chinese companies from trading on US exchanges.

We believe the removal of Hong Kong’s special trading status could pressure China’s growth, as foreign capital will be tougher to access. Currently, Hong Kong serves as the financial gateway to China and by overriding the ‘one nation, two systems’ rule, China has further hurt its chances of the yuan becoming the world’s next reserve currency.

After the fall: The world is improving, but for China the situation remains tenuous

As the home for the world’s first COVID-19 outbreak, China was ‘ground zero’ for quarantine-related economic shocks, and one of the first economies to start to recover. Indeed, Chinese Purchasing Manager Index (PMI) surveys have rebounded sharply in May back to expansion, after cratering in February. In our view, this is a positive thing for the global economy and for global stocks, as Chinese macro data improvements often leads global economic sentiment by several months.

However, since the global stock market rally commenced on March 23, Chinese equities notably have underperformed American stocks and the Chinese yuan has depreciated relative to the US dollar. This suggests to us that the market increasingly understands China’s headwinds are growing, and that a rancorous US election season may only serve to create more headline risk for the region. US relations are not China’s only issue; there has been a recent resurgence in COVID-19 cases in capital Beijing that, if it gets worse, may threaten China’s tenuous domestic economic recovery. Furthermore, we think Chinese policymakers have been less aggressive in applying direct fiscal and monetary stimulus than the US, Europe, or Japan.

China Manufacturing Purchasing Managers Index (PMI) provides an early indication each month of economic activities in the Chinese manufacturing sector.It is compiled by China Federation of Logistics & Purchasing (CFLP) and China Logistics Information Centre (CLIC), based on data collected by the National Bureau of Statistics (NBS)

To review other risks and more information about RiverFront, please visit the website at www.riverfrontig.com and the Form ADV, Part 2A. Copyright ©2020 RiverFront Investment Group. All Rights Reserved. ID 1223353