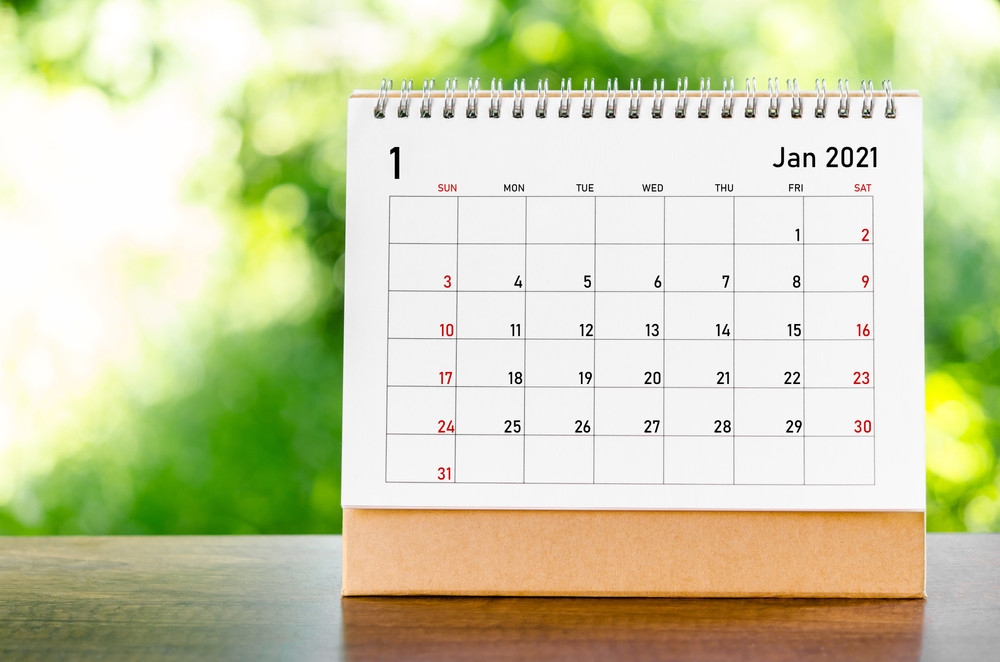 The S&P 500, Dow Jones Industrial Average, NASDAQ Composite and Russell 2000 Indices all recorded new all-time highs in January. The month was marked by strength through the middle part of January, but the last several days of the month saw volatility rise and equities decline. The late month drop pushed the Dow and S&P 500 into negative territory, but the Russell 2000 and NASDAQ Composite still recorded gains to begin the new year.

The CBOE Volatility Index or VIX Index spiked higher in late January. After spending most of the month in the low 20s, the VIX Index shot to its highest closing level since late October of 37.21, before settling at 33.09 to end the month. Volatility had clearly declined during November and December, which we believed might be pointing to some complacency building in the market and potential short-term weakness. Particularly as we moved into the new year and as COVID-19 cases accelerated, we expected that volatility could rise once again. We saw this rise in volatility late in the month and we believe investors should continue to be prepared for a bumpy ride as we move through these near-term difficulties with the pandemic until the vaccine becomes more widely distributed.

From a style perspective, there was not a huge degree of difference between value and growth to begin the new year. Value modestly lagged in the large to mid-cap space, but it outperformed growth in small-caps. We continue to use our disciplined approach of seeking out high-quality companies with improving business conditions at what we believe are good prices. We still believe that the value/growth disparity that reached a peak last year will likely continue to shift in 2021, with value improving on a relative basis. As always, we will continue to make purposeful investments in both stocks and bonds as we move forward in what we believe will be a period of wider outcomes of investment results.

The numbers for January were as follows: The S&P 500 fell -1.01%, the Dow Jones Industrial Average dropped -1.95%, the Russell 3000 slipped by -0.44%, the NASDAQ Composite advanced 1.44%, and the Russell 2000 Index, a measure of small-cap stocks, rallied 5.03%, and was the clear leader among these widely followed U.S. equity indices. Mid-cap and micro-cap stocks also turned in gains to begin the new year.

We will continue to monitor the trend that began to develop in the latter part of 2020 with small and mid-caps outperforming large-caps. Large-caps dominated for most of last year, but small-caps surged late in 2020 and that momentum has continued into 2021.

The yield on the 10-year U.S. Treasury moved higher early in January and spent most of the month yielding above 1%, which was the first time it had been above this level since March 2020. It closed January at 1.11%. The most interest-rate sensitive bonds struggled with that backdrop of rising rates. We continue to believe that we will be in a “lower for longer” interest rate environment for the foreseeable future, but we also think that some modest steepening of the yield curve could occur in 2021. The ongoing and massive support from the Federal Reserve is generally keeping a lid on interest rates, (particularly on the front end of the yield curve) and we expect that environment to continue.

Economic gains continued in December, but data was mixed. The ongoing pandemic and the recent surge in COVID-19 cases has had an impact on parts of the economy. For the first time since coming out of the pandemic, payrolls declined in December. Non-farm payrolls fell by -140,000 when a modest gain of 50,000 was expected. The unemployment rate stayed at 6.7% in December when a modest increase to 6.8% was anticipated. The unemployment rate was 3.5% in December 2019, so there is still a lot of ground to make up in the job market.

The widely followed ISM Manufacturing Index surged higher in December, increasing to 60.7 compared to estimates of 56.8 and the prior month’s mark of 57.7. New orders and prices paid increased in December. The ISM Non-Manufacturing Index, which covers the much larger service industries in the U.S. economy, also advanced more than expected. This reading came in at 57.2, beating estimates of 54.5 and increasing from November’s level of 56.8. Manufacturing and service industries have clearly improved from the shutdown period and continue to show solid growth. Recall that ISM readings above 50 indicate expansion and below 50 signal contraction.

Retail sales (ex. auto and gas) fell again in December by -2.1%. This was a much larger decline than the expected -0.3% drop and November’s reading was revised down to -1.3%, reflecting a larger decline than previously reported. Retail spending slowed as we moved into the winter months and was likely impacted by the surge in COVID-19 cases.

The housing market continued to be a source of broader economic strength to close out the year. The pace of new home sales improved to an annualized rate of 842,000 in December, but this was below expectations of 870,000. However, housing starts, building permits and existing home sales surpassed expectations in December and all showed higher levels of activity compared to November. Housing measures have been at levels in recent months that have not been seen since prior to the 2008 Financial Crisis. The Conference Board’s Leading Index gained 0.3% in December as expected.

The first reading of fourth quarter GDP came in at 4.0%, which was below expectations of 4.2%. The personal consumption component of GDP was below expectations as well. Estimates had been trending higher for fourth quarter GDP growth early in the quarter, but as it progressed, estimates came in and once again were likely impacted by the worsening of the pandemic during the winter.

While growth continues in many parts of the economy, particularly in the housing market, some data like the job market and consumer spending struggled. The fourth quarter did reflect above trend economic growth, but as expected, it was more muted than Q3 growth and the headwind of the pandemic impeded the expansion from being stronger.

The Fed has been unwavering in its commitment to support the proper functioning of the financial system. On top of this, the 5th fiscal stimulus plan was finally passed in the final week of 2020. The Biden administration has already proposed another round of stimulus of about $1.9 trillion in early 2021. It appears that the appetite from Republican Senators is for a slimmer round of stimulus, so we should expect more negotiations in the coming weeks. We will watch closely to see what this next round of stimulus ultimately looks like.

The stock and bond markets were more mixed in January as volatility picked up late in the month. We remain resolute in our belief that the U.S. economy and corporate America will make it through this pandemic period, despite a surge in cases as we move into 2021. Vaccines are on their way, but it is taking time to produce and distribute these more broadly. The next few months might see elevated capital market volatility as we go through this challenging period.

Overall, we do believe that the economy and financial markets are heading in the right direction. As always, we continue to believe it is imperative for investors to stay focused on their long-term goals and not let short-term swings in the market derail them from their longer-term objectives.

In January, credit remained very firm and spreads continued to narrow. Historically, higher volatility with a firm credit landscape has been a positive sign for equities, as it suggests a healthy backdrop for the economy and markets. As a result, our tactical strategies remained in a risk-on position throughout the month.

We believe that market participation continues to broaden out, with new leadership from small-cap stocks supporting the larger trends. Financials, Technology, and Consumer Staples remain strong performers. While U.S. economic growth currently exceeds most other countries and regions globally, we anticipate that non-U.S. economies will begin to recover.