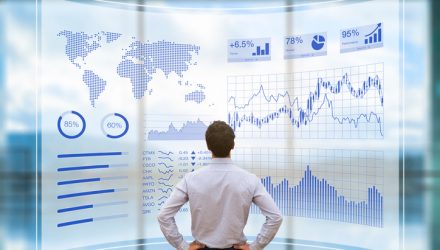 The second quarter of 2019 continued the first’s optimism but with a considerably more modest tone. Global equity markets experienced a seesaw pattern, with April and June up and May experiencing losses. This up one month, down another was driven by the continued threat of trade disruptions amongst the most significant economic regions, as well as mixed signals about the health of the U.S. economy.

As was the case in the first quarter, the U.S. economy is the only large economy not on some sort of life support.  Europe and Britain continue to show weak economic output tied to uncertainty about Brexit and the production slowdown across the continent. Asia is experiencing a general malaise as the repercussions of China’s economic deceleration ripple across the region. Some think the worst, at least as regards certain international economies, is behind them, which has allowed international equities to keep up with the U.S. However, we see this view as too optimistic, too early.

The most interesting thing we observed in the second quarter was the movement in the fixed income space as rates dropped. It is unusual this late in the cycle to see bonds outperforming equities. The graph to the right compares the returns of global bonds with global equities since early 2018, when Auour started our de-risking process. Notably, the first quarter 2019 recovery was truly the rising tide that floated all boats. We are watching now to see if upcoming storms will capsize any of them. 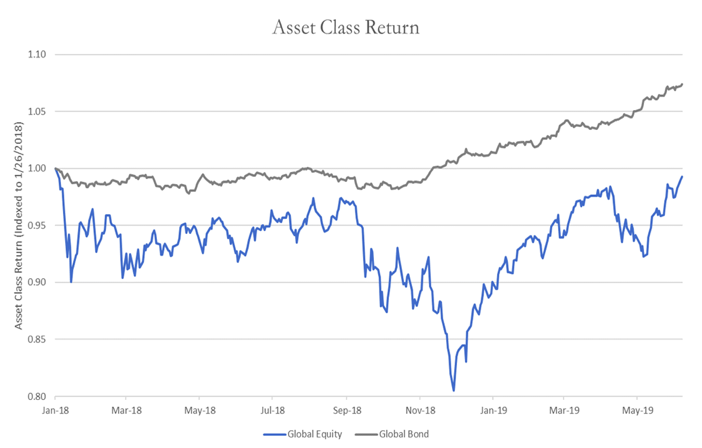 The Mispricing of Liquidity

Liquidity—the growing scarcity of it right now—is something that has bothered us for a while. It’s getting harder to turn an asset into cash. Higher liquidity implies the ability to sell quickly at a price similar to recent pricing. One way of thinking about liquidity is to consider the difference in the liquidity of a house (not very liquid) versus a publicly traded equity (typically very liquid). You can often measure in months, or even years, the time from the moment of first action to sell a house to the point where the proceeds of the sale are in your bank account, and those proceeds might be quite different from your initial fair price assumption. For a publicly traded equity, on the other hand, the time is counted in seconds between taking action to sell and the sale itself, and the sale price will typically be only pennies different than the last quoted price. Hold that thought for a second.

According to a 2019 survey by the Employee Benefits Research Institute, 75% of employees are more focused on generating income, the amount one earns on a regular basis, than they are on wealth—which is different than income in that it is stored or saved value—through retirement. This is understandable, but it carries unintended consequences and hidden risks.

As shown in the graph below, bond rates, as set by global central banks, have been hitting all-time lows, with many developed countries having negative interest rates. The world is now at a point where $13 trillion in world debt has a negative interest rate. This has driven down interest rates for all types of income-producing instruments, causing investors to reach for yield to meet their desired income. We fear this is setting the U.S. investor up for a level of economic fragility not experienced in some time.

It is said that in good times, debtors are concerned with how much debt they can afford versus the amount of debt they have. It is only in bad times that the reality of the magnitude of debt becomes abundantly painful. That may be a useful analogy for what we see now: in good times, people greedily look for the greatest yield they can obtain versus the safety of the principal they have invested. When times get tough, we fear it might become very difficult to obtain that principal in full. Central bankers around the globe have been pushing rates down with the hope that it will spur loan demand, which will then be used for capital expenditures. The key word here is hope because the result appears to be the opposite. It now feels like the low rates were simply fanning air over a weak fire. The flames come back temporarily, but once the blowing stops, the fire is revealed to be coals. For fixed income markets, once the oxygen from the central banks is removed, it is unclear if the markets will be able to keep the flame lit. 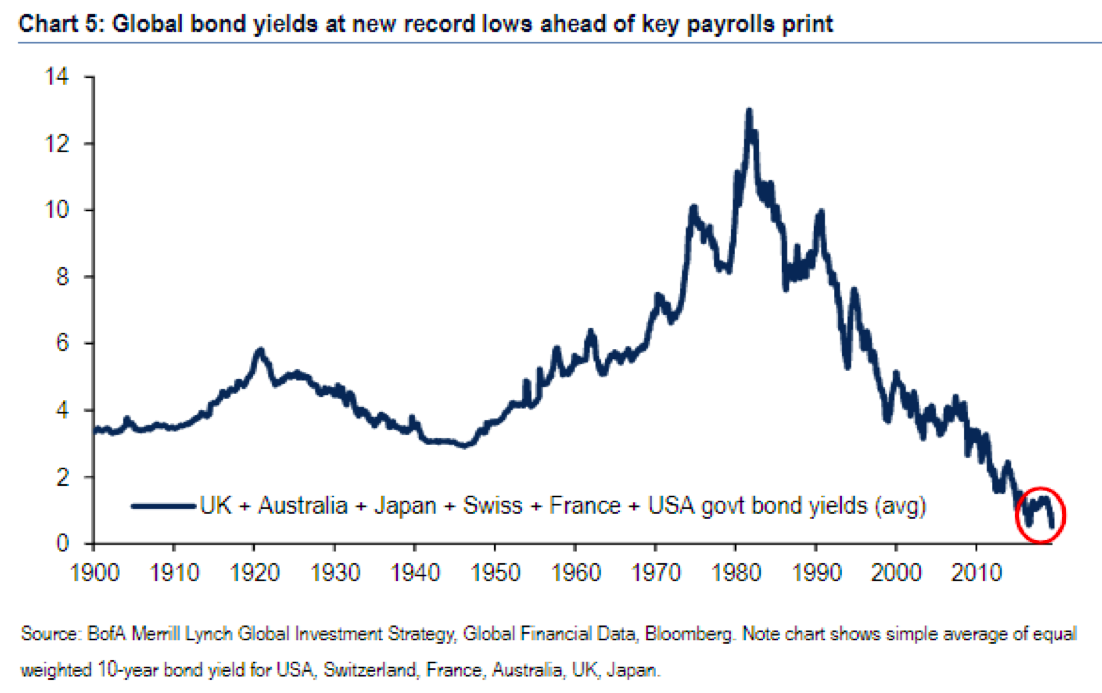 In our past two communications, we have highlighted our concerns about China and the fragility we think weakens their centrally planned economy. That focus, though appropriate, has meant we haven’t spent as much text on Europe, where signals indicate weakening economies. Over the past few months, investors in Europe have been learning the downside of reaching for yield, and the ramifications of ignoring the benefits of liquidity.

Three investment advisers in Europe have garnered a lot of media attention recently, unfortunately not for their investment prowess:

First is GAM, an investment firm in Switzerland, which made headlines in late 2018. The departure of one of their portfolio managers for misconduct caused a client panic. The Absolute Return Bond Fund prevented redemptions due to the illiquidity of their holdings. The result has been that GAM’s assets under management have dropped by a third, and the liquidation of ARBF is still ongoing, 10 months later.

Second is Woodford Management, in the U.K. Neil Woodford is the famed manager of the Woodford Equity Income Fund, with assets of £3.3 billion. In May of this year, concerns were building that the investments were illiquid. Clients looked to sell, which caused the fund to prevent redemptions. 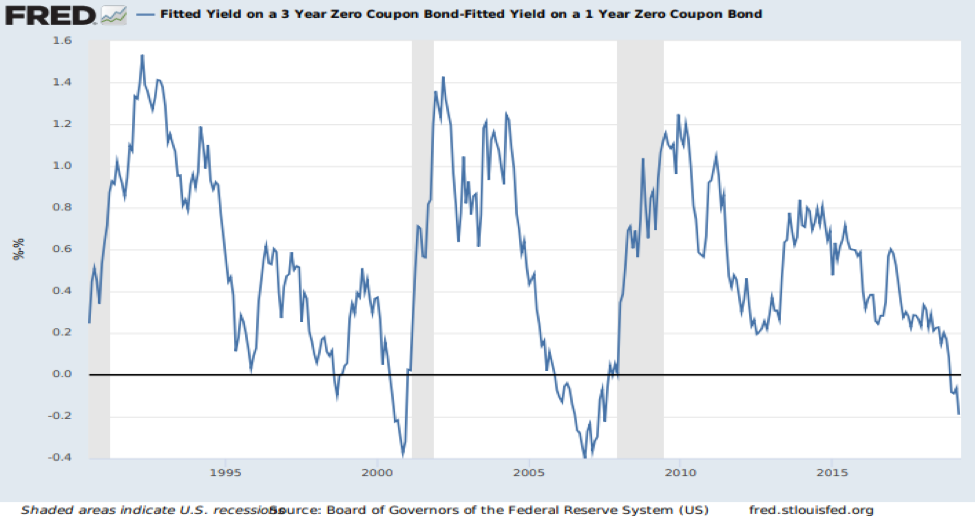 The initial restriction period has been extended to an unknown future date. In the first 30 days of attempting to liquidate the fund, the manager has only been able to sell £300 million of the total fund. It is unclear when people will receive their money or how much they can claw back.

Last, H20 Asset Management, also in the U.K., has had a troubling experience with illiquid debt instruments. Only a few weeks after the Woodford news, analysts alerted investors to the fact that H2O was holding illiquid debt instruments in funds that promised daily liquidity. Since then, clients have pulled $7 billion from the firm, which had managed $30 billion. H20 has kept the funds open, but they have had to write down the value of the illiquid securities.

These events are being absorbed without repercussions by the global investment base so far. But we need to recognize them as signals of potential instability. It is not surprising when such events happen occasionally, but when they occur in a good market environment, it’s of concern. Asset prices are at their highs. Economies are “O.K.,” with no major region in a recession. We are concerned, therefore, about what happens when the economy weakens, which is a normal cyclical event we should all assume is in the offing.

There are increasing signs that risks of a soft patch within the economy—in the U.S. as well as internationally—are rising. The Federal Reserve prediction model is suggesting that the risk of a recession in the U.S. within the next 12 months is greater than 30% and growing. Fixed income markets are also hitting levels that have typically warranted caution. For one thing, we see this in how the market views future interest rates: Many market pundits have highlighted the inverted yield curve, the term for when longer-term interest rates are lower than near-term rates, and how it often presages a recession. The yield curve indeed has a good track record of predicting economic soft patches, but it is not the only signal that can aid in predicting recessions. The forward spread is another metric, which measures the cost of money (i.e., interest rates) now versus where the market expects it to be in the future. Today, the forward spread is sitting in a very precarious position, which adds to the idea that we are getting far along in this cycle. 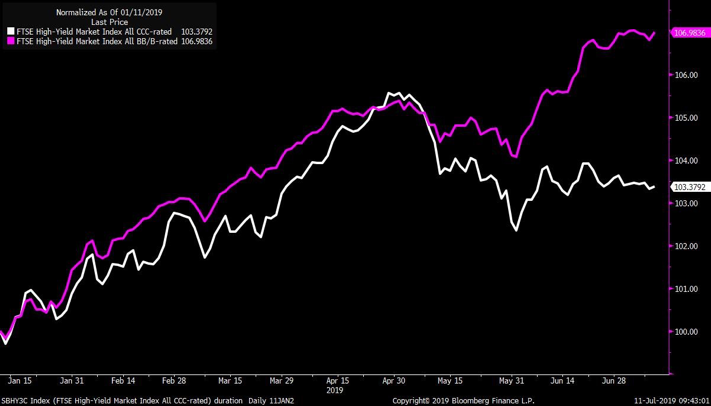 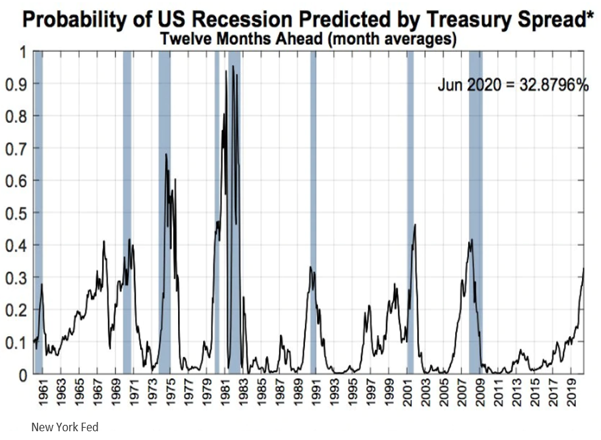 We are also seeing fears build in the returns that various grades of debt are experiencing. Lower grade debt markets (i.e., more speculative) have been, in fact, underperforming the less speculative aspects of the high-yield credit markets.  This is a sign that credit markets are becoming a little more suspect of lending long term to weaker companies.

The question that many are asking is: Are the concerns expressed in U.S. credit instruments based on the underlying fundamentals of the companies involved, or are they simply projecting the weaknesses already being seen in international markets?

Although the U.S. has had some questionable economic readings, as shown in the chart below, the weakness we see, such as in the growth in hours worked, is best described as a slowing and not as a significant softening.

However, that is not the case in international markets, where our portfolios continue to have a reduced exposure.

Uncertainty is showing itself in other weakening trends across the globe. Japan has been a material exporter of machinery, relied on by manufacturers around the world, and those orders continue to weaken, with no sign of bottoming, so far. The same is being seen in other segments tied to global economic health. We have seen firms that offer a wide perspective on economic activity starting to suggest that the pains we have seen to date are continuing.

Major U.S. companies, such as FedEx in shipping, BASF in chemicals, and 3M in general industrial, have all expressed greater caution about the economy. Though they offer a view into only a portion of global activity, their analyses give reason to be cautious to those moving into riskier aspects of the market with questionable liquidity. 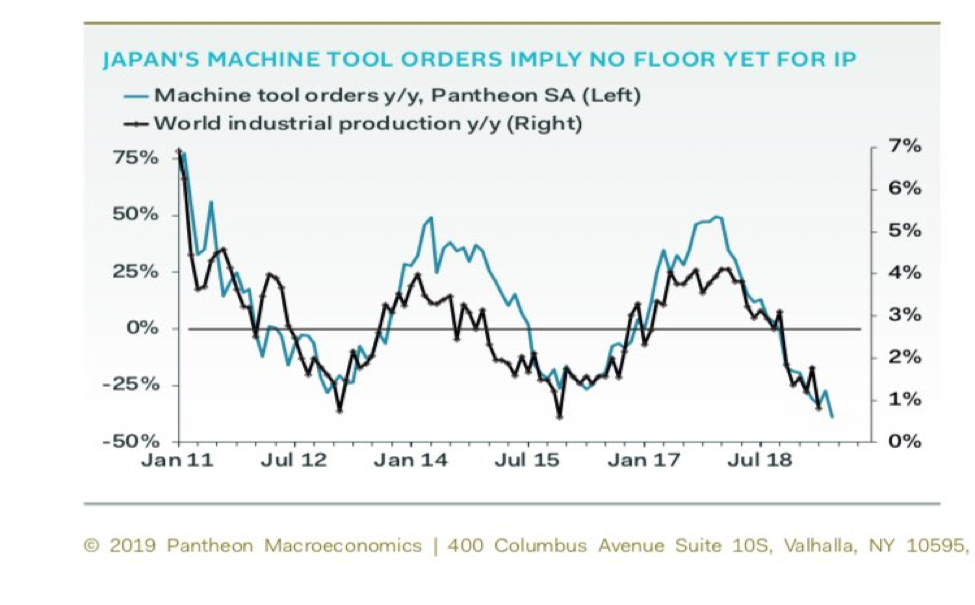 We have mentioned in prior communications that a mixture of greed and complacency can produce a dangerous concoction. We fear that many market participants today are acting on the expectation of positive outcomes at a time of increasing fragility.

We continue to be defensively positioned with our exposure tilted toward the U.S. and in typically safer asset classes. Our job as risk managers is to assess the improbable and infrequent factors that can create deep and enduring market downturns. As the probability of a downturn increases, we need to adjust our positioning as we have already done to some extent and will continue to if needed. As if in a theater in which you begin to smell smoke, some might stay put and hope it’s temporary. We, however, are moving our seats near the exit. The new view from these seats is not as good, but if the smoke builds, seeing the end of the movie will no longer be our objective.