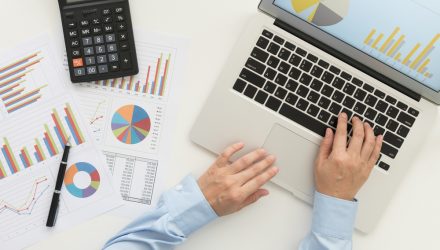 Auour Investments: The Quarter in Review

“When sorrows come, they come not single spies, but in battalions.”

The second quarter was almost a mirror image—the same, but in reverse—of the first. March ended with the world shut down, investment markets in disarray, significant layoffs, and people fearing infection. As June ended, the world was re-opening, investments had recovered most of what was lost since March, people were re-entering the workforce, and the frustration of confinement overwhelmed the fear of infection. The fast response to the virus’ spread was followed by hopes for an equally fast recovery.

The market recovery boosted all markets and regions, yet those in the growth-oriented space were alone in fully recovering. The economic impacts of the virus appear to be accelerating a trend towards a more digital world, as companies that facilitate a more digital life not only recover but make new highs in valuation and hoped-for market dominance. Time will tell whether the high valuations the anointed few reached in the second quarter can sustain themselves, or if they represent a phenomenon somewhat similar to the internet bubble in 2000.

The fixed income markets also recovered from what was a turbulent first quarter. Over the past one year, they have outperformed the equity markets, with a much lower level of risk. This was true in many of the subsegments of the fixed income world, helped by the U.S. Federal Reserve instituting a mandate to buy almost all forms of corporate and government debt. The Federal Reserve’s response was powerful and constructive, yet telling, in that it made crystal clear the magnitude of our monetary leaders’ fear concerning the global shutdown. Though the markets took the actions as positive, they also emphasize how significant the economic threats are that we might yet face.

Emile Borel, a French mathematician, offered the following scenario to help us contemplate the event of something highly improbable occurring: given unlimited time, if a million monkeys typed at a million typewriters, they would eventually recreate Shakespeare’s works. In other words, no matter how unlikely or impossible-seeming an event might be, it still has some chance of occurring, given infinite time and resources. It could be more probable than some other even more improbable event. We think this discussion is relevant to the current time, in which massive resources are being deployed to take us back to the improbable economic state that existed pre-pandemic.

For ourselves—and we assume for most of our readers—the year 2020 has been filled with unlikely and unfortunate events: the massively destructive Australian fires, the Covid-19 pandemic, bubonic plague in Northern China, the worst locust swarms in 27 years, the loss of Hong Kong’s independence, the first combat deaths between two nuclear powers in more than 40 years, {taking a breath} a new swine flu outbreak in China, and dam breaks in the U.S. and China. And that is just in the first six months! We haven’t even hit hurricane season yet.

When you stand back from the myriad of unlikely events hitting the globe over a short period of time, it seems like we are living a Shakespearian tragicomedy. (We choose a tragicomedy, not a tragedy. Let us be optimists and assume current events will end positively, eventually.)

Act I – The Setup

As we wrote in the last half of 2019, and also in early 2020, the global economy was sitting in a precarious position. China was feeling the impact of the trade war, Europe was dealing with lower exports, and Japan was struggling with a deflationary environment. The lone bright spot was the U.S. consumer, who is also the world’s consumer. We highlighted, at the time, though, growing concerns with consumer strength, as the economic expansion showed high levels of strain. The low unemployment rate in the U.S. then was masking a weakening trend in job openings, as companies became more cautious and entered into a realignment phase.

The economic expansion, as depicted by the blue dot, above, was the longest on record, yet most people failed to experience a marked improvement in economic activity, which suggests the recovery from the 2008 crisis was built on a fragile foundation. From our perspective, the fragility was caused by elevated levels of leverage (debt) around the globe, specifically in the U.S. corporate sector, the key employer of the U.S. consumption engine. Corporations—not just in the U.S.—were taking on high levels of debt at a time when their health was weakening, which resulted in the vast majority of debt having lower credit ratings (i.e. lower chances of repayment) than in normal times. 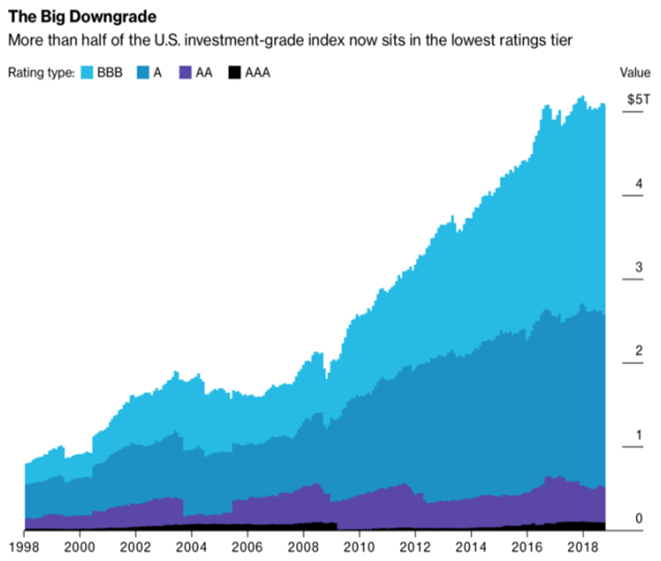 We used the term fragility a lot last year, seeing gains in the markets juxtaposed against a wavering economic backdrop. In our January 2020 commentary, we stated, “How this all ends in the U.S. is anyone’s guess, but recent events suggest that when the end comes, as it already appears to be ending in some countries, it will not be pretty.” We did not know what might cause a downturn, but we saw that any economic downturn would likely be significant and the market’s reaction swift. 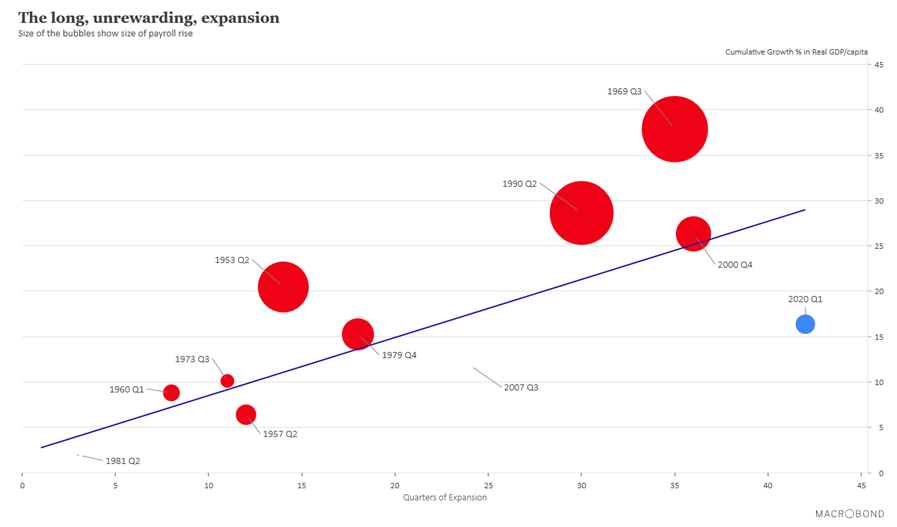 Enter Covid-19, stage left. Identified in late 2019 in China, and then making its way to the West, the virus resulted in shutdowns and shelter-in-place requirements across the globe late in the first quarter. The global shutdown brought about the quickest and largest economic contraction in modern times. In our review of history, it is hard to find parallels for an event that acted on the economy like a light switch being flicked off. Uncertainty rose, and the world’s investment markets dropped dramatically.

The U.S. Federal Reserve (a.k.a. the Fed), our hero, comes to the rescue. The world runs on dollars much more than it does on Dunkin,’ and the Fed, keeper of the dollars, flooded the market with credit in an all-out effort to soften the anticipated blow from the shutdowns. Over $3 trillion was added to the economic engine in the Fed’s effort to make sure it could withstand the impact from lost jobs and income. The U.S. government, alongside other nations, pushed economic stimulus to ward off the darkness enveloping the world. 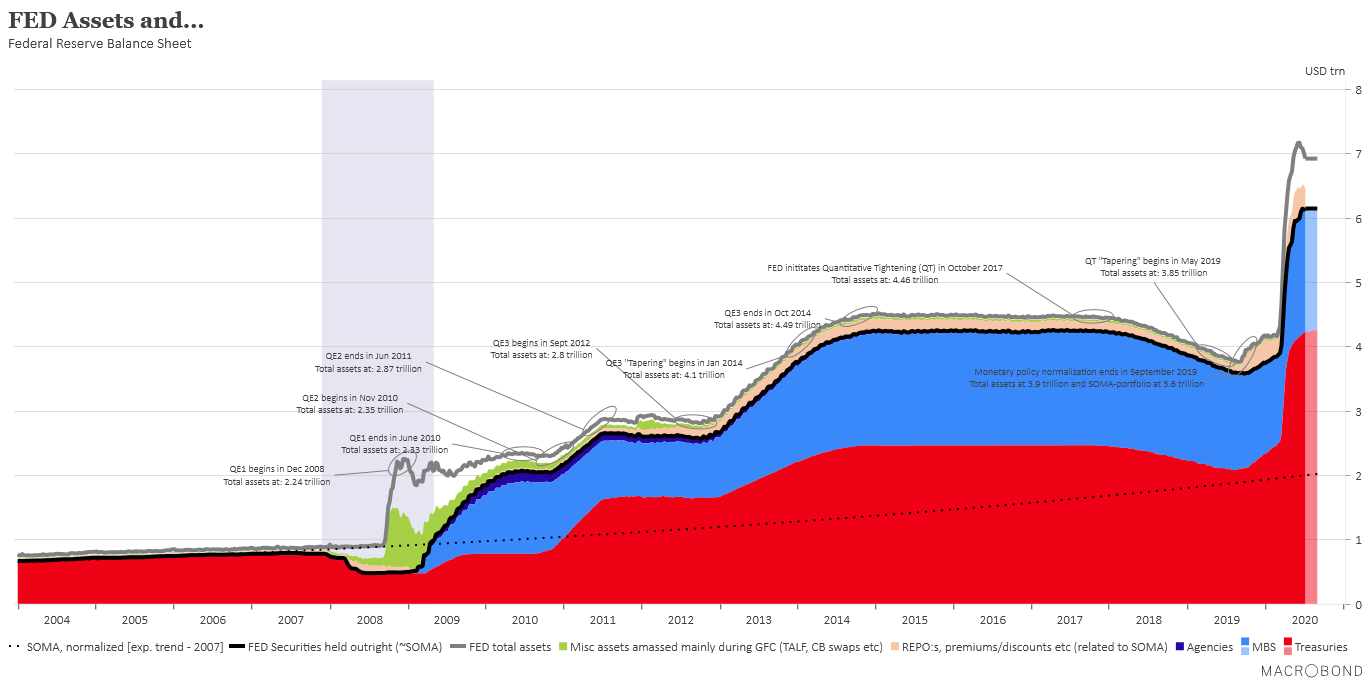 The government, through the CARES Act, and the Fed, via easy money, aimed to maintain the animal (dare we say monkey?) spirits that had kept the economy moving forward even in its increasingly fragile state. Lower corporate tax rates in 2018, the resolution of the trade war in late 2019, and then trillions of dollars backed by government debt in 2020 have been geared to preserving and increasing animal spirits, all with the hopes of maintaining consumer demand and to ignite a reinvestment phase within the U.S. corporate world. 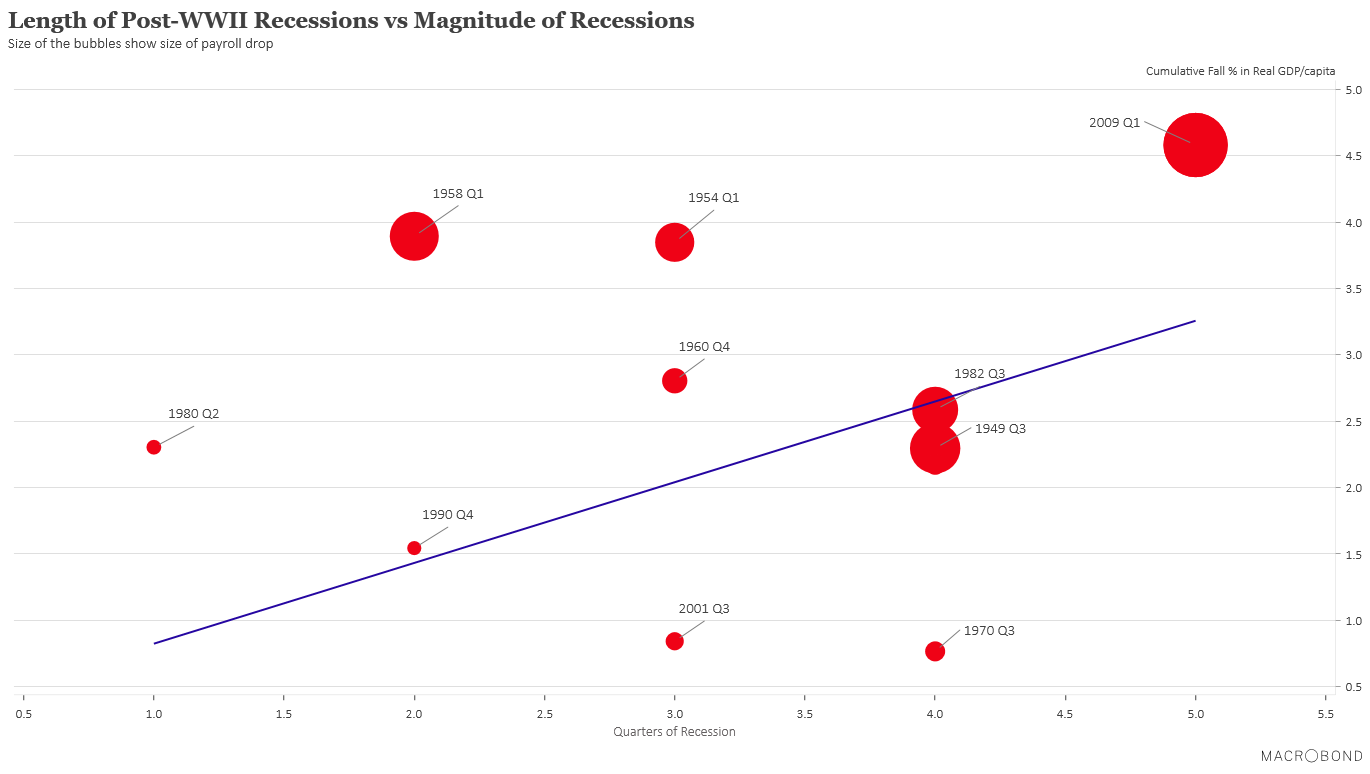 These stimuli have partially worked, but not to such an extent that we sit on solid footing. Business investment has shrunk faster and farther due to virus-induced economic damage. And, although consumer demand for goods and services is down, animal spirits still reign in the investment markets. Perceived winners of an isolated economy (e.g., Amazon and Zoom) and new market entrants (e.g., Tesla and Nikola) are favored now, not only as survivors but as long-term winners. Mass speculation on low-priced stocks (mostly companies in bankruptcy with no equity value, such as Hertz and Chesapeake Energy) has energized some in the youngest generation of adults to think that markets only go up, not down. Short-term financial greed has overwhelmed long-term economic investment.

It is unclear when Act III will end and Act IV begin, but we can imagine how the narrative might play out.  The Fed and the U.S. government have taken considerable but temporary actions that lessen the impact of the economic freefall. But the drop is showing signs of being a long one—one where the negative economic effect could overwhelm the simulative impact of the government’s liquidity.

Although employment has bounced since the deep freeze of March and April, permanent losses have continued to rise. Recent employment gains should not be taken as a sign of a new and enduring base of economic activity.  The much-anticipated re-opening process started with a boom, but recently has stalled at a much lower level of consumer activity as virus cases increase and people’s fear surrounding it stay high. The recent ramp in new cases is having an impact on the recovery as we are seeing small business’ hours-worked (as presented in the chart below) turning lower. 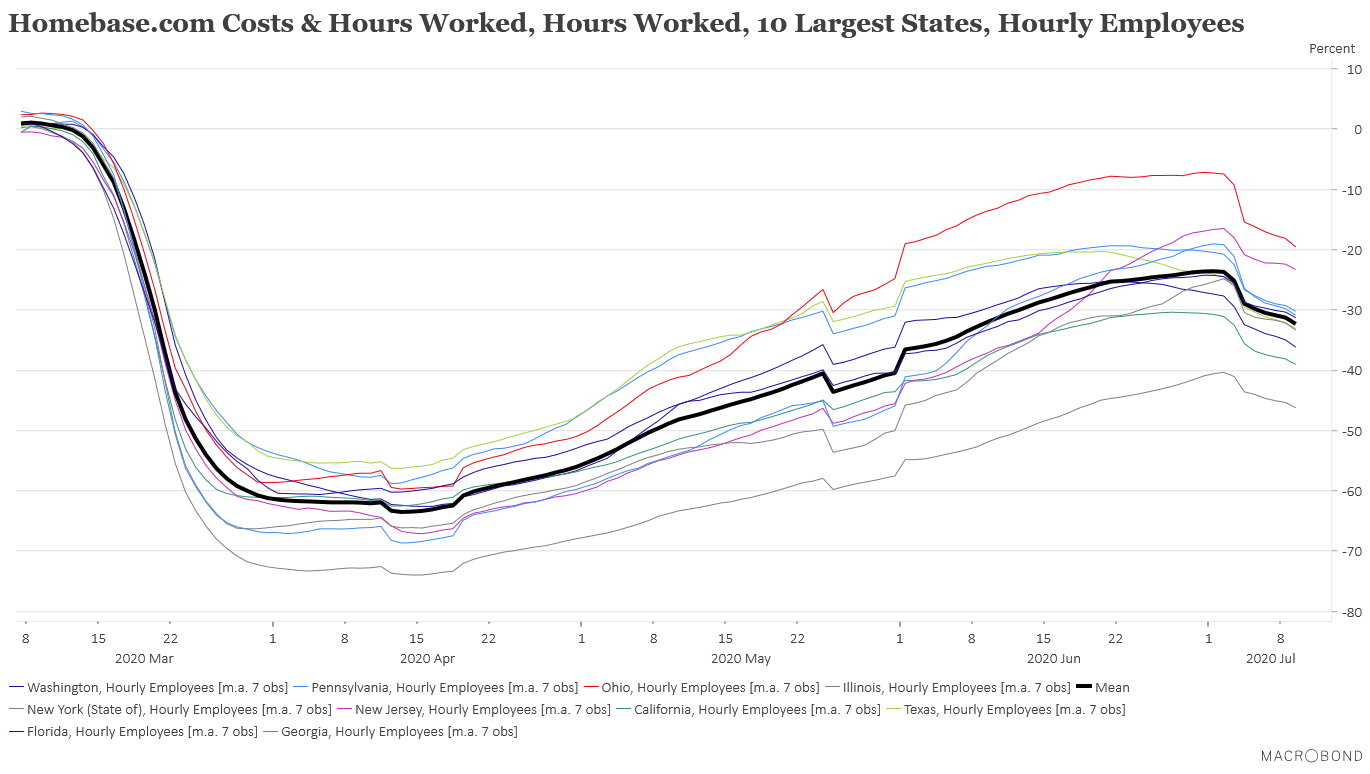 The U.S. is not alone in experiencing a weak recovery as the pandemic is hitting all. Europe and Japan indicators anticipate a very tepid consumer. Even China – the first to be impacted – continues to feel the impact and appears to be masking economic weakness. As an aside, the communist party is acting in a way that authoritarian states act when internal troubles are mounting.  China’s heightened aggressiveness—in the form of breaking its two-systems-one-country approach with Hong Kong, poking Taiwan, having North Korea break off ties with South Korea, and allowing its conflict with India to grow—suggests something is afoot. The authoritarian playbook has been to escalate external conflicts when attempting to maintain internal control. The point we are attempting to make is that the pandemic started as a health issue, has quickly turned into an economic issue, and may lead to a political issue. We will give this more attention throughout the year because a destabilizing Pacific region would likely act as a falling domino.

Act IV seems somewhat predictable—the market will drop—although the timing is uncertain. Valuations can’t only go up when the economy is faltering.

Act IV’s anticipated volatility makes predicting how Act V ends a lost cause. We will see a world with high levels of debt and a corporate sector rebuilding after an economic earthquake. It is hard to imaging tax rates staying at their current level, needing to rise as an offset to the increasing burdens of state and federal government budgets.  At the same time, we are seeing companies instituting changes to their supply chains, moving from just-in-time to just-in-case.  This will increase inventory levels and likely hurt corporate profitability as they become less efficient, planning for the next supply disruption.  Consumers will likely change past spending habits given uncertainty of another pandemic in the wings. And governments around the globe will be figuring out how to adjust to the unknown ramifications of a rising disgruntled populace.

The million monkey theorem is about respecting probability, suggesting that the most unlikely outcome still has a chance of happening.  Our models suggest market participants are overly confident that the massive resources pushed into the economy will lead to the unlikely outcome of a quick recession followed by an enduring expansion.  We will need to wait until closer to the end to see what plot twists the monkeys have in store.  So, at this time, our models have us defensively positioned and glued to our seats as (primarily) speculators.