You are at:Home»ETF Strategist Channel»Analyzing the State of the U.S. Economy 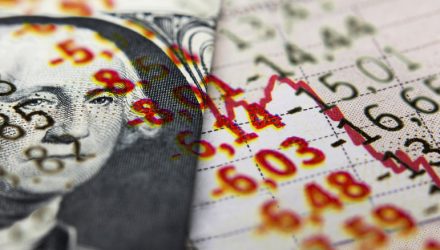 Analyzing the State of the U.S. Economy

The Federal Reserve’s Open Market Committee cut interest rates on July 31 for the first time in 10 years, lowering the Federal Funds rate by 25 basis points, and indicated that despite decent economic data, trade tensions were creating uncertainty which was contributing to a global slowdown. Fed Chair Powell seemed as confused as the general populace as to why the Fed was cutting rates 10+ years into an economic expansion with inflation near its target range and the lowest unemployment rate in over 50 years. Certainly the case can be made for pre-emptive easing ahead of an economic slowdown; however, the data received over the past 30 days would indicate the US economy remains healthy.

The first reading for second-quarter GDP growth was received in July and showed the US economy grew at a +2.1% annualized rate, down from Q1’s +3.1%, but consistent with the post-Great Recession recovery. Personal Consumption grew at a +4.3% pace, ahead of Q1’s +0.9%. The Atlanta Fed GDPNow GDP Forecast is pointing to sub-2% growth ahead, likely due to continuing trade tensions with China.

June’s Unemployment Rate was 3.7%, up slightly from May but still at historically low levels. Importantly, 191,000 jobs were created in June, beating estimates for 150,000, showing the economy hasn’t lost too much steam despite officially becoming the longest post-recession expansion on record. Average Hourly Earnings edged up +0.2% and have risen +3.1% YoY. The Labor Force Participation Rate ticked up to 62.9% while the Underemployment Rate came in at 7.2%. Average Weekly Hours held steady at 34.4.

Inflation remains stubbornly short of the Fed’s 2.0% objective. However, the continued rise in wages will likely pressure overall prices higher in the coming year. CPI for June edged up +0.1% for a +1.6% YoY pace, while PPI rose +0.1% for a +1.7% YoY rate. Ex Food and Energy, consumer prices have risen +2.1% YoY and producer prices +2.3%. The PCE Deflator is up a scant +1.4% YOY, indicating general price rises have been modest. The latest ISM Prices Paid index reading for July showed a drop to 45.1 from 47.9, likely giving the Fed some cover for their latest interest rate cut.

Domestic Equities continued their year to date rally with a strong showing in July. Despite the first +/-1% daily move in months, the S&P 500 Index shrugged off mixed messages from Federal Reserve Chair Jay Powell on Wednesday to close +1.44% higher for the month. Small- and Mid-Caps, as measured by the S&P 600 and 400 Indices returned +1.14% and +1.19% respectively, and have continued to lag their Large-Cap peers on the year.

Looking at the relationship between Small- and Large-Cap equities more closely, the year to date performance delta favors Large-Caps by more than +500bps. What’s more, over the past year, SmallCaps have underperformed Large-Caps by nearly -15 percentage points. With more than 80% of their revenues coming domestically, Small-Caps could be ripe for a rebound and provide defense against a global economic slowdown. What’s more, relative valuations are attractive, and a continuation of positive U.S. economic surprises could be an additional boost. According to data provided by Factset through July 26th, S&P 500 companies with greater than 50% of their revenues coming from the U.S. have grown revenue +6.4% so far in Q2 versus -2.4% for those companies with less than 50% of revenues coming domestically. Furthermore, the data becomes more telling from an earnings standpoint, with companies focused on the U.S. growing earnings by +3.2% in Q2, and those focused internationally seeing their earnings fall -13.6%. Clearly, those focused domestically are producing superior results.

From a style standpoint, Value outperformed Growth by +0.60% on the month, even as sectors such as Communication Services and Information Technology were the standouts, returning +3.37% and +3.33%, respectively. Value-oriented sectors such as Consumer Staples, Financials, and Real Estate led the Value cohort, returning +2.50%, +2.45%, and +1.74%, respectively, outperforming the broader market. Healthcare was a notable laggard, down -1.59% on the period, and remains the year’s worst-performing sector (up only +6.35%), even underperforming most bond indices. Healthcare continues to suffer from headline risk associated with the 2020 election, executive orders, and talks of “Medicare For All”, but it’s defensive growth characteristics and attractive valuations shouldn’t go unnoticed.

International equities lost ground in July with both developed and emerging markets posting losses. Developed international equities as measured by the MSCI EAFE Index lost -1.25% on the month, followed closely by the MSCI Emerging Markets Index which gave back -1.15%. International economic data has remained sub-par in recent months, deteriorating over trade impacts and uncertainties, while geopolitical risks have increased. Developed and Emerging market central banks have begun cutting interest rates to stimulate demand, but trade overhangs and the risk of a hard-Brexit have increased. With China stalling on trade talks, Boris Johnson taking over as U.K. Prime Minister, and potentially more easing from the European Central Bank (ECB), investors have shifted capital to the United States favoring relative stability.

Despite the negative headlines, international equities have produced positive returns year to date, but have not kept pace with the U.S. For the year, developed international equities are up +13.10% while Emerging Markets have gained +9.46%. Looking at the trailing 3-year period, the opposite is true, with EM outperforming EAFE by +1.32% per annum; however, over 5-years both EAFE and EM have produced lackluster returns, gaining +2.98% and +2.24% per annum respectively, compared to +11.32% per annum for the S&P 500 Index.

The Federal Reserve lowered rates by 25 basis points yesterday afternoon. There were two votes cast in dissent of this adjustment (Boston Fed President Eric Rosengren and Kansas City Fed President Esther George). Balance sheet runoff was truncated. It had been scheduled to end in two months, but that date was pulled forward to August 1st. The long end of the Treasury curve moved lower in response to the announcement that the Fed will begin buying Treasury securities to replace all Treasury maturities in its security portfolio immediately.

According to the Fed’s official statement, below-target inflation and global uncertainties acted as the impetus for the rate cut. Even though the rate reduction was expected, the curve flattened, with longer maturities falling more than shorter maturities. The kink in the yield curve grew more pronounced, and the inversion (3-month yields being higher than 10-year yields) expanded.

Even with the flattening of the curve, the U.S. continues to offer the most attractive bond yields in the developed world. In Switzerland, you will need to purchase a 50-year maturity to earn a 0% return. Last month you only needed to go 30 years to break even on a Swiss government bond. What a bargain it was… Europe can even offer investors High Yield/Junk bonds with negative yields. Truly hard to fathom.

Credit spreads have continued to tighten. This has supported the performance of Investment Grade and High Yield bonds. Emerging Market bond yields have also seen their yield spread over Treasuries shrink, boosting their return. These categories have led the way in fixed income returns in 2019, more than doubling the return of the U.S. Government index, which at 5.03%, is itself a high bar to hit in the world of bonds.

One area of the Credit market that has not participated in this risk-rally, is the lowest quality tranches within High Yield. CCC (those companies nearing default) rated bonds have significantly lagged the broader Credit market. This would appear to show that there are limits to the risk that investors are currently willing to tolerate while stretching for yield.

Municipal bond funds continue to see elevated demand, with 29 consecutive weeks of positive flows. The persistent demand in a time of limited supply has caused tax-free bonds prices to rise and yields to fall in general, but particularly sharply among shorter maturities. A barbelled portfolio, where very short maturities are paired with longer-term maturities continues to make sense while managing duration and optimizing portfolio yield.

Alternative investments were largely positive performers in August. Federal Reserve Chair Jay Powell cut interest rates for the first time in 10 years on Wednesday, reducing the Fed Funds target range to 2.00-2.25%. While markets expected a cut (expectations were 100%), they still were disappointed by the lack of clarity from the Fed Chair and the uncertainty over a “mid-cycle adjustment” when U.S. economic data has produced positive upside surprises.

Market reactions to the Fed press conference were seen most notably in the U.S. Dollar and Gold spot price. The Dollar, as measured by the DXY Index rose +0.77% on the day and finished the month of July up +2.48% to close at 98.5, the highest monthly closing level since April 2017. The Dollar is up +2.44% year to date and +4.19% over the past year, creating headwinds for S&P 500 earnings growth. The market reaction in Gold was also pronounced, with Gold falling -1.27% yesterday, bringing its monthly gains to +0.3%. Gold is up +10.3% on the year, benefitting from natural hedging characteristics, the prospect for lower interest rates, and the ever growing pile of negatively yielding global debt. At last check, there were over $14 TRILLION worth of bonds with negative yields around the globe.

Real Estate, as measured by the FTSE NAREIT All-REIT Index rose +1.45% on the month, while West Texas Intermediate (WTI) crude oil prices rose a scant +0.2%. Commodities as a whole, as measured by the Bloomberg Commodities Index fell -0.9%. Volatility, as measured by the VIX Index rose +6.9% to close at 16.1 on the month. More notably, the VIX has spiked +22.9% over the past three months, as global uncertainties have increased. Hedge Fund strategies continue to produce lackluster results, with 9 of 9 strategies underperforming the MSCI ACWI Index, and 8 of 9 strategies underperforming the Bloomberg Barclays Aggregate Bond Index. On the currency front, the British Pound lost more than -4.2% on the month to close at 1.22 USD/GBP as Boris Johnson took over as Prime Minister with a hardline Brexit stance, while prospects for further rate cuts from the European Central Bank sent the Euro lower by more than -2.6% against the Dollar to close at $1.11 USD/EUR.