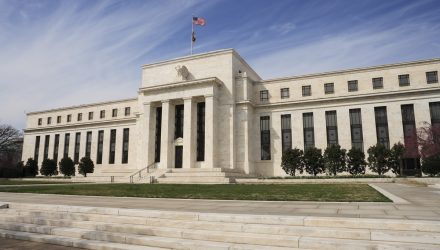 An ETF To Watch During Fed Meeting Today

U.S. markets and stock ETFs regained their footing toward the end of Tuesday after oil prices retreated from a historic surge in the prior session, and as investors await a widely anticipated interest rate cut from the Federal Reserve on Wednesday.

Wall Street expects the federal reserve to cut interest rate tomorrow amid concerns about growing weakness in the economy and concerns about a continued trade war. Expectations from the Fed include 100% of entrants on a recent poll believing that there will be a 25 basis point rate cut in September.

Economist Joel Naroff of Naroff Economic Advisors explained, “ A trade war that continues into next spring or summer almost certainly causes a recession that is likely to spread worldwide.”

Still, there are some expert to believe that fears of a recession are over-emphasized, and it is possible we will move forward without problems.

“Recession talk has been overdone. Yes there has been some slowdown in various economic indicators but… The outlook for robust holiday spending is good based on the high-level of consumer confidence that should drive growth and stocks higher,” said Richard Sichel, The Philadelphia trust corporation senior investment strategist.>
Updated data on Tuesday revealed U.S. industrial production recovered in August, a sign that is likely to ease concerns over U.S. manufacturing as many worry about an economic downturn.

One question is whether a Fed rate cut would be sufficient to stave off any issues from global economic weakness in general.

Brian Kelly from CNBC believes that banks will be likely affected tomorrow and so keeping an eye on the SPDR S&P Regional Banking ETF (KRE) is a good idea.

“One of the problems that the Fed has right now is that the yield curve is still very flat. So they want to get the banks lending again so that’s what I’m gonna be watching. You look at the regional banks tomorrow. Look at KRE, which is the regional bank ETF. Do you want to see if that yield curve starts to Steven, that should be positive for the banks. So I would look at KRE to see if you can buy it on a break out in the afternoon,” said Kelly on CNBC.