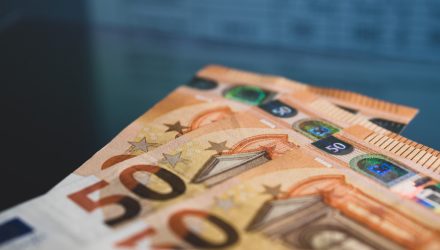 Allocating in Europe When the Euro Is Weak

Last week, the euro and dollar reached a virtual parity to the U.S. dollar as global investors fled to the greenback as fears of worldwide economic slowdowns continue to mount. Despite a recent bounce, the euro is still at two-decade lows as inflation, geopolitical tensions, and energy shortages grip the bloc.

VettaFi contributor Dan Mika spoke with Kevin Nicholson, chief investment officer of global fixed income at Riverfront Investment Group, about how the firm is considering investing in Europe and other developed nations as their currencies lose pace with the greenback.

(Note: This interview has been edited for clarity and brevity.)

Dan Mika, VettaFi contributor: This morning, we got the first rate hike in a decade from the European Central Bank, including a 50 basis point hike to their primary rate, which was higher than what was signaled before. What was your reaction to that, and how do you see that impacting the Euro’s strength or weakness to the dollar?

Kevin Nicholson, Riverfront Investment Group: Given the fact that the ECB was behind the curve, it had to really front load its rate hike in case the eurozone economy is thrown into a recession due to increasing inflation, the energy crisis, and now you have Italy’s government collapsing (editor’s note: Italian Prime Minister Mario Draghi resigned on Thursday after losing a coalition confidence vote. The Italian parliament will hold new elections in late September.)

So many different items are affecting the eurozone right now; they kind of have a three-headed monster. While the Euro rallied off the initial excitement of raising 50 basis points, it started to give up some of that. We believe it was going to be a short-term response anyhow because it was going to be nullified by a more significant move by the Fed next week. The U.S. is much further ahead in the rate hiking cycle, which has also been why the Euro has been under so much pressure.

Mika: What is the thinking for your clients in how you’re allocating to Europe and into other international equities in general? Compared to the dollar, the euro hasn’t been this low since 2002, and there are so many factors to the downside.

Nicholson: We’re underweight international right now, specifically in Europe. We believe that the ECB is behind the curve, that their economy will face tough times, especially with inflation rising as fast as it has been, and they’re having limited access to gas. We believe that Russia will continue to weaponize gas flows, putting further pressure on its economy and creating additional inflation.

We will probably continue that as we expected there to be continued downside pressure, both on the euro and their economy as a whole. Germany is the biggest economy inside the Eurozone and struggles with inflation which is running at about 8.2%. You’re seeing Spain’s inflation spiking to 10%. When you combine that with any economy that was having difficulty coming out of the pandemic, it just doesn’t bode well for investing in that part of the world at this point.

Mika: Have you made any changes to currency hedging strategies?

Nicholson: In our 50/50 portfolio, for example, we have in our benchmark the ability to have a 10% allocation to developed international (securities), and we’ve hedged half that. When you look at the composition of the DXY index, the Euro makes up 57.6% of it, followed by the Japanese yen, which is also under pressure given that they continue to have yield curve control. So, these countries have to make one of two choices at this point in the cycle. They’re either going to have to distend their economy in the case of Japan and Europe, or they’re finally starting to raise rates.

But because that base is so low, they run the risk that if they go into a recession, they’re not going to have a lot of dry powder to be able to fight without taking rates back negative. That’s why we have been less than enamored with developed international at this moment.

Mika: You mentioned the hiking cycle, and I’m wondering what your thinking is on where the cycles would go for both the strength of the euro and the eurozone economy. There is so much geopolitical tension happening at this moment when inflation is so high, and there are so many other factors outside the ECB’s control.

Nicholson: Unfortunately for the ECB and most central banks, inflation has to be their number one priority. For that reason, you know, we suspect that the euro is going to cross through parity again. In light of the ECB rising by 50 basis points today, the Euro is pretty much flat on the day thus far. That leads me to believe it will be nullified by the Fed raising rates.

We think that in the coming months, you’ll see further depreciation of the euro, mainly because of all of the things we mentioned previously with the war, inflation, the potential energy crisis, and the collapse of Italy’s government. I think that part of the reason that the Euro didn’t rally more today is because when the ECB announced their Transmission Protection Instrument (a strategy to minimize the impact of rate hikes on the borrowing costs of more-indebted nations), they didn’t really give it much teeth. I think that that’s what the market was really looking for. As far as this cycle, I believe that we’ve probably seen the near-term highs on the euro in the last couple of days, and I think you will continue to see it gradually tail off and move closer to parity again.