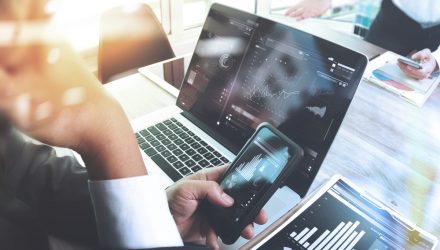 5 Questions Investors Have About The Market – Answered

Despite perceptions of a booming economy with strong consumer demand and low unemployment, U.S. GDP reported a surprise contraction in the first quarter of 2022. High inflation is forcing the Federal Reserve to rapidly raise rates ushering in a new, higher, interest rate environment and causing a volatile market with loss of asset values.

In light of these concerns, we want to address investors’ pressing questions on how to interpret the current market environment, and where the market is heading.

Q1: How does the US compare to the rest of the world in regard to current inflation rates?

Inflation rose in the U.S. sooner than in most other economies, possibly due to relatively strong demand from the U.S. consumer and more aggressive stimulus during the pandemic. Recent inflation has been high through most major economies, with China and Japan the exceptions. This normalization can be partly attributed to the rapid strengthening of the dollar in 2022, as a stronger dollar makes imported goods cheaper in the U.S. 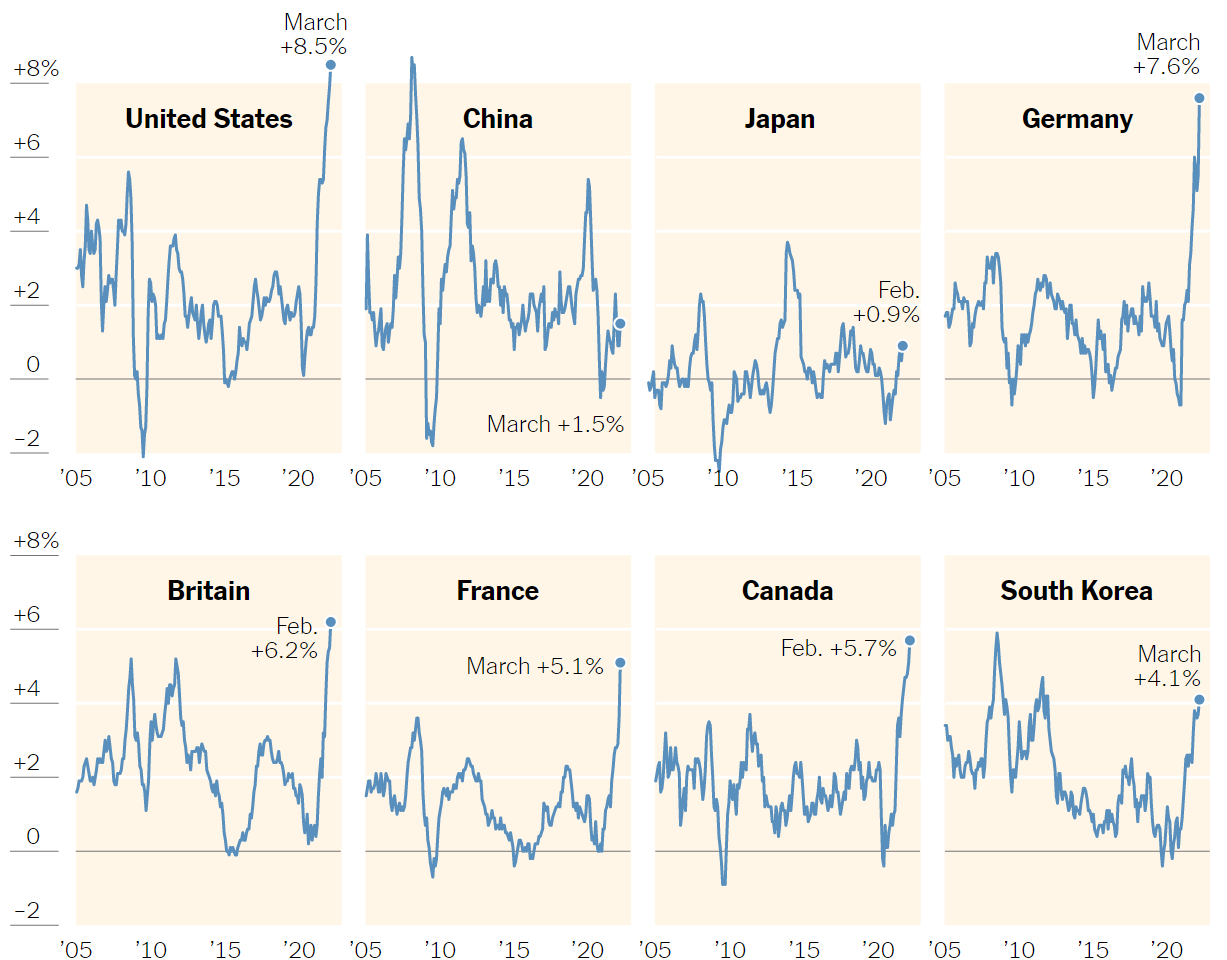 Q2: What does high inflation mean for investors going forward?

Historically, there is no evidence that high inflation has any correlation or effect on bond or stock returns in the following year. The charts below show the year-over-year percent change in the Consumer Price Index (CPI) on the vertical axis against (1) the yearly return of a 50/50 bond/stock portfolio, and (2) the equity premium (yearly return of stocks minus the return of bonds, both in the year after the CPI change. (Data from “Irrational Exuberance” Princeton University Press, 2000, 2005, 2015, updated). These charts show no significant pattern or relationship between inflation and portfolio returns – the collection of data points is just a blob that is not tipping in either direction, implying that returns can still be high or low no matter the level of inflation in any given year. 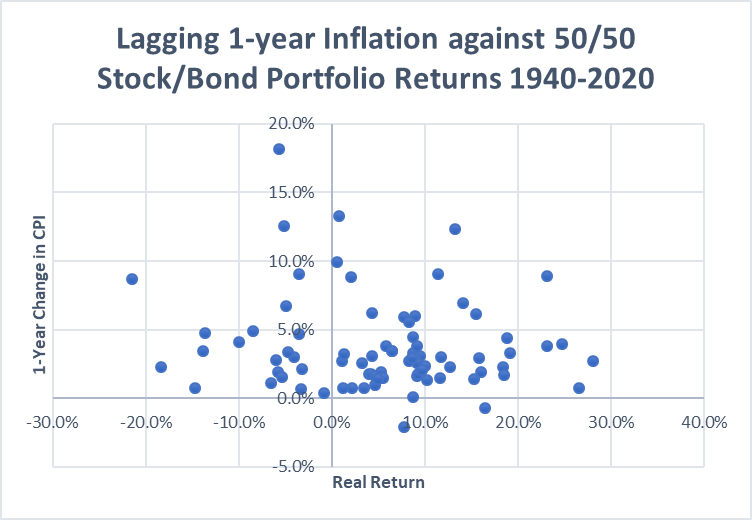 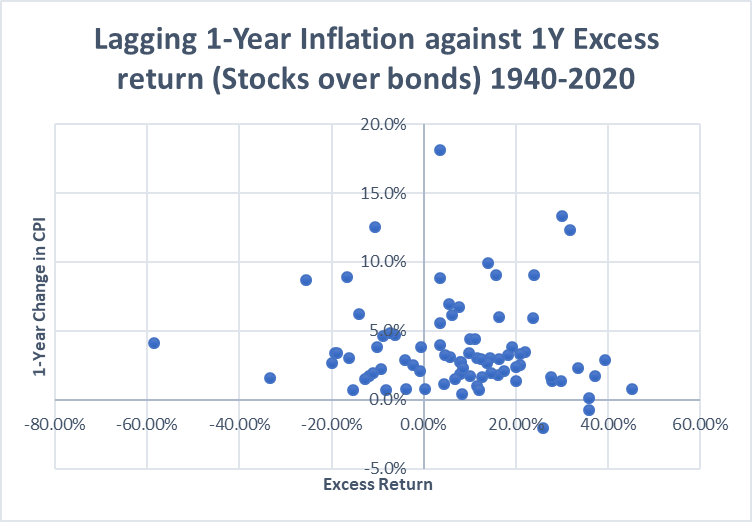 The conclusion is that investors should not be influenced by inflation when making the decision of whether to invest or even to keep money invested in the market.

Q3: What does the contraction of the economy in Q1 mean for the future?

With monetary policy tightening and exceptional growth already having taken place in 2021, it’s almost guaranteed (i.e. fully priced in) that we will be and are currently seeing a decline in the growth rate of GDP. While the economy unexpectedly contracted by 1.4% (quarter-over-quarter) in Q1, the contraction was largely due to a drop in exports amid slowing global growth coupled with a strong dollar. On a year-over-year basis, GDP was up 3.6%, compared with a 5.5% growth rate at the end of 2021. Underlying demand is still solid—consumer spending rose by 2.7% and business investment increased by a strong 9.2% in Q1.

A slower rate of economic growth doesn’t necessarily spell recession, especially against the backdrop of an unusual pandemic-driven cycle. Markets now foresee at least 9 rate hikes (of a 25-bps rate move) in 2022, putting Fed’s implied rate above 2.7% by the end of this year. While there are risks of overshooting on future rate hikes (which implies risk of recession), we expect the Fed to assess the impact on growth and adjust the pace of tightening should the economic condition deteriorate quickly.

Our flexible quantitative approach to fixed income investing incorporates a wealth of information on the interest rate environment. This includes the latest market data on interest rates for Treasurys of all maturities (the yield curve), credit spreads on investment grade and high yield corporate bonds, and bond volatility.

A strong economy and record-high inflation have led the Fed to take an aggressive rate hike stance that has put downward pressure on bond prices. That means information has been priced in when it comes to future rate hikes, especially for the short end of the yield curve (2-3 year Treasury yield). Long-term treasury yields are likely to experience heightened volatility in the near future due to uncertainties around growth and inflation expectations. Both 5-year breakeven and 5-year/5-year forward breakeven inflation, a metric used for inflation expectations, trimmed over the final week of April.

While bonds with longer durations suffered in Q1, demand from investors for recession protection could help prevent yields from rising significantly higher. Ultimately, maintaining risk hedging and protections in the portfolios by holding appropriate duration exposure relative to the risk level is a different investment strategy than using duration as a return-seeking asset to bet on the interest rates while trying to beat the markets. Despite all asset classes going down in Q1 (except for commodities), short-term correlations between Treasuries and equities remain negative and effective for risk management.

Our exposure to long-duration bonds is currently at a historical low level across our portfolios in response to rising rates, but it’s important to remember that inflation and interest rates are not the only risks. We have multiple bond allocations like short-duration high yield along with TIPS, mortgage, and investment-grade credit in the portfolios that are optimized to manage overall duration risk and obtain portfolio optimality both for short-term and long-term investments.

Q5: Does all this mean we’re headed for recession and how should the portfolio be managed for that?

Neither economists nor markets know for sure. Economic information should not be ignored, but too often, statistics about the economy describe what has happened in the past rather than what will happen in the future. The Federal Reserve believes the economy is strong enough that inflation can be lowered to target levels with minimal economic damage and is eager to raise rates to a “neutral rate.” That is, the rate where inflationary forces are neutralized without unnecessary harm to employment or the growth rate of the economy. This is an inexact science, but an often-cited value of 2.4% is slightly below the market expectation for rate increases. The Fed is making decisions based on economic data and has no interest in causing unnecessary harm to the economy, so we can expect the Fed to reduce the number of rate increases if there are signs of the economy slowing.

The current economic environment is also a challenge for investing. Inflation and low but rising interest rates may reduce return expectations while economic stress and interest rates in flux can mean higher than normal volatility for stocks and especially bonds. This leads to a dilemma for conservative and moderate investors.

With risk-free treasury bills currently providing significantly negative real return, conservative investors are faced with the choice of a guaranteed loss of purchasing power, or accepting volatility in the hope of a positive real return. As much as they might like to avoid this Hobson’s choice and stay out of the market, not investing is choosing to lose to inflation.

Taking on moderate risk in a balanced portfolio is also challenging. Bonds are much more volatile than in the past, but still less risky than stocks, which are likely to remain relatively volatile. European equities may have higher expected return from their lower valuation, but come with associated risks. One constant in investing is that we do not know the future and hence there is no single asset class that can meet all investors’ needs. So, a portfolio optimized to balance the risk and reward trade-offs among many asset classes and over many uncertain market scenarios remains an important choice.

Under an inflationary regime, the most certain way for investors’ wealth to lose value is to keep it in cash, because that cash, although it will retain its notional value, will lose its real purchasing power under inflation. This means the best chance of retaining purchasing power over time is by staying invested in a diversified portfolio of stocks and bonds, which historically has always grown in value over time and has always recovered from periods of inflation and economic contraction.

At New Frontier, we believe in investing in markets, and that over the long term, stocks and bonds tend to have positive returns and remain an effective store of purchasing power of wealth. However, within shorter time periods, anything can happen. This means we do not know what is going to happen immediately going forward, but that change is likely to occur, and given the current state of affairs in markets, this change is perhaps more likely to be beneficial to investors.

The Fed will make every effort to prevent inflation by timing rate hikes in the near future. So, although the inflation rate is high and its impact is currently being felt strongly within households, this condition will come to an end at some point when the global economic regime transitions into its next phase.