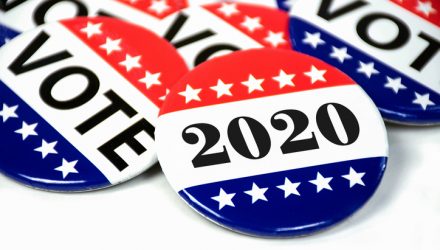 An annual tradition in RiverFront’s yearly Outlook is to publish wide-ranging and candid interviews with portfolio decision makers, and 2020 was no exception. Today, we are featuring the transcript of an interview recently conducted with Strategas Research Partners’ Dan Clifton, one of our favorite political strategists. Dan sat down with RiverFront Chief Investment Strategist Chris Konstantinos to talk about what investors can expect from the high-stakes 2020 election season in the U.S.

Q: The U.S. election is on many investors’ minds, both here and abroad. What has been the historical track record of equity markets in the year before and after a presidential election? Does it matter whether the election is open or whether an incumbent is battling for re-election?

Q: Political strategist James Carville is quoted as saying: “It’s the economy, stupid” in reference to what matters for presidential elections. Is it really that simple? What are some other fairly reliable signals of whether an incumbent president may be re-elected?

Presidential elections are referendums on the president and the president’s party. The economy is a major part of this referendum for voters. Looking back 100 years, if a president avoided a recession in the two years before re-election, every president went on to be re-elected.  Conversely, every president that had a recession in the two years before re-election went on to lose, except for President Calvin Coolidge in the 1920’s. But the relationship is clear to me, if you want to be re-elected as president, then avoid a recession. This is why presidents are so focused on getting stimulus into the economy in the year prior to an election.

The best economic indicator I look at for a resident’s re-election is after-tax, after-inflation incomes.  Quite simply, the more incomes are growing, the larger the victory for a president’s re-election. Historically, if income growth from January through October of the election year is above 1.4%, then the president has won re-election.

While the election year is a national election, a handful of states are going to determine who the 2020 winner is. President Trump can still win the 2020 election by carrying the necessary states but lose the popular vote by a wider margin than in 2016. This makes the national head-to-head matchups between Trump and the Democratic candidates less indicative of the actual result. Trump won the Electoral College in 2016 by 74 votes. This gives him some wiggle room to lose a state or two in 2020 and still get 270 votes. There are three states that Trump won by less than 1.5 points – Wisconsin, Michigan, and Pennsylvania. He can lose two of these states, but he cannot lose all three.

MIDWEST IS CRUCIAL: Whether Democrats can beat President Trump in 2020 is going to come down to if their nominee can beat Trump in those Midwestern states, which look the most opportune for flipping, or even pull off a win in Florida or a southern state. If you look at head-to-head matchups at the state level, former Vice President Joe Biden has the best shot. Progressive policies like banning fracking are not going to poll as well in a state like Pennsylvania.

The early primary states are going to be critical to who ends up being the Democratic nominee. Iowa has traditionally killed front-runners and, particularly for the Democrats, is a good indicator of who ends up as the nominee.

Q: If a Democrat takes the White House, what do you see as the dominant S&P 500 sectors and themes? What if President Trump is reelected?

With candidates still in the race that span the Democratic political spectrum, who the Democrat is, not just their party ID, is going to determine the investment implications. Under any Democrat I would expect more regulatory scrutiny, especially for Financials and Energy, and a more negative environment for corporate buybacks and areas like private prisons and for-profit education. Many Democratic objectives in these areas do not need Congress, so it does not matter that Republicans will likely maintain control of the Senate.  Other sectors like Healthcare have varying proposals from the Democratic candidates but a Republican Senate would be a firewall here to what could get done, likely limiting Democrats to improvements to the Affordable Care Act (ACA). All in, I would expect varying degrees of a sell-off with any Democratic winner and a weaker dollar while bonds, REITS (i.e. prisons), renewable energy and ESG companies benefit.

If President Trump is re-elected, expect him to be emboldened, especially on trade. This could lead to more threatened use of tariffs to make new deals, such as with the EU. But it would also maintain the deregulatory agenda and overall continue more pro-business policies than under any Democratic candidate. Trump might also take on health care with another attempt to repeal and replace the ACA, but he’ll likely be dealing with a Democratic House.

Regardless of outcome, certain sectors and themes will be in the crosshairs or beneficiaries. There is a bipartisan effort to tackle high price drugs, that is not going to go away with the election. Brand name drug companies are not safe under either party. Tech companies, particularly FANG, social media, and those using/storing user information are also going to face continued scrutiny. Infrastructure will likely be a priority for a president of either party as well.

Q: How does the specter of impeachment play into market strategy right now? Should investors be concerned about how the market will react to an impeachment?

While the House voted to impeach, the expectation is that the Senate will fail to convict. Therefore, impeachment itself is not a market mover, in my view. However, impeachment has, and will continue to have, ramifications elsewhere.

Potentially one of the biggest implications that impeachment has is in the Senate. During an impeachment trial the Senate is in session beginning at noon Monday through Saturday. This effectively takes all of the senators running for president off the campaign trail – Sens. Warren, Sanders, Klobuchar, Booker, and Bennet. With the House potentially sending articles of impeachment to the Senate, this means that the Senate might hold its trial in January and could go through the start of primary season with the Iowa Caucus on February 3rd.

Q: With so much political division in the U.S. right now, many voters on both sides of the aisle are afraid of market impact if ‘the other party’ gains power in the election. Does the stock market historically tend to favor one political party over the other?

Since 1933, the highest returning partisan control combination for the S&P 500 has been a Democratic Senate, Republican House, and Democratic President – while under this scenario the S&P 500 has had average returns of 13.6% per year, it would also mean every chamber has to flip in 2020 for us to get there. Our current combination, which would be likely if Trump won re-election, of Republican Senate, Democratic House, and Republican White House averages a 10.8% return. Interestingly, the other most likely scenario of Republican Senate, Democratic House and Democratic President has not occurred since Grover Cleveland in the election of 1886.

Q: You have formulated a highly novel portfolio construction philosophy based on lobbying activity. Can you talk a little bit about the effect of lobbying on corporate results, and why investors should care which companies are investing in lobbying?

In our experience at Strategas, we have found that lobbying is not a traditional factor accounted for in analysts’ models which means the earnings benefit from it can be missed, leading to a mispricing of stocks. Companies lobby for different reasons, some lobby directly in response to a legislative or regulatory issue, some lobby to try and get action from Washington D.C., and some lobby merely to keep a presence and gauge on Washington D.C. activities. The commonality, however, is that all these companies understand that if they are not at the table, they are on the menu.

Investors should care about a company’s government affairs activities because the government has a hand in every industry and nearly every working of corporate America. Proper handling of government affairs can be the difference between becoming a villain or hero after developing a high-priced life changing drug. It can have a role in whether an M&A deal gets approved. It can change components of a bill that would have had a detrimental impact on a company’s business. Lobbying, in our view, should be a core component of risk management at any company.

About Strategas: Founded in 2014, Strategas Asset Management (SAM) is a macro thematic investment manager. SAM leverages “top-down” research and quantitative security selection to offer a suite of thematic and tactical investment strategies. SAM, which operates independently, is wholly owned by Baird Financial Corporation and as a result, is an affiliate of RiverFront Investment Group.

Dan Clifton is the Managing Director and Head of Washington for Strategas. He serves as Partner and Portfolio Manager for Strategas Asset Management. The views expressed are Dan Clifton’s and not necessarily those of RiverFront Investment Group.

Technology and internet-related stocks, especially of smaller, less-seasoned companies, tend to be more volatile than the overall market.

Index Definitions: You cannot invest directly in an index

RiverFront has entered into a Model Provider Agreement with Strategas Asset Management (“SAM”), whereby SAM provides an investment model that is used to make the investment selections for the RiverFront Strategas Policy Opportunities (“RSPO”) portfolio. SAM is a registered investment advisor wholly owned by Baird Financial Corp. (“BFC”). The model portfolio is generated by SAM’s affiliate, Strategas Securities, LLC (“STS”)), DBA Strategas Research Partners, a FINRA member broker-dealer and registered investment adviser. STS is also wholly owned by BFC. SAM, pursuant to an agreement with STS is authorized to offer and distribute the model portfolios to its clients, including RiverFront. SAM and STS are affiliates of RiverFront but are operationally independent from RiverFront.