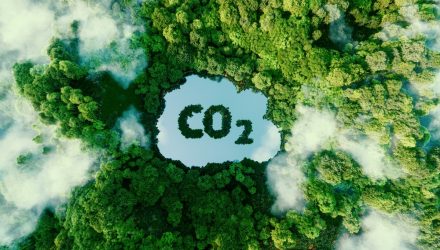 KRBN seeks to provide a total return that, before fees and expenses, exceeds that of the IHS Markit Global Carbon Index over a complete market cycle. The fund is benchmarked to IHS Markit’s Global Carbon Index, which offers broad coverage of cap-and-trade carbon allowances by tracking the most-traded carbon credit futures contracts. The index introduces a new measure for hedging risk and going long on the price of carbon while supporting responsible investing.

Investors have an opportunity to get in on the nascent stages of the international carbon market as carbon emissions trading picks up momentum on the global stage. The carbon allowances market can also help diversify a traditional stock and bond portfolio. Global carbon futures markets historically exhibit a low correlation to other asset classes.

The United Nations climate summit, COP26, opened a path to international carbon trading. U.N.-certified carbon credit could be used by regulated markets and standardize more informal ones. In Glasgow, governments agreed on long-stalled rules for how countries and companies can trade carbon emissions credits across borders.

A broader deal asks its 190-plus signatories next year to revisit emissions-cutting plans that fell short of what scientists say is needed to prevent the worst possible effects of climate change. Governments from almost all of the world’s countries endorsed a set of preliminary rules over how governments and companies can create, value, and swap credits to drive their net emissions lower with a global trading system.

The rules are part of what has been called Article 6 of the Paris Accord, which was signed in 2015. Still, a global carbon market won’t happen overnight. The agreement first invites nominations for a supervisory body to oversee the marketplace.

Currently, there is a patchwork of carbon markets globally. These include markets set up and regulated by governments, such as the European Union’s Emissions Trading System and similar markets in China and California. In these markets, heavy-emitting industries such as utilities are given limits for how much carbon they can emit.

If they stay under that limit, they can sell any extra to others emitting more than their ceiling. The new rules could lead to the linking up of regional emissions-trading schemes. Informal carbon-offset markets include companies voluntarily participating in activities such as planting trees and restoring peatlands or funding others to do so. These projects generate credits that can be traded among companies to drive down their own net emissions.

According to IHS Markit, as of December 31, 2020, the global price of carbon was $24.05 per ton of CO2. It is estimated that carbon allowance prices need to reach $147 per ton of CO2 to meet a 1.5°C global warming limit. As of December 31, 2020, the three largest global carbon futures markets, tracked by IHS Markit’s Global Carbon Index, had a market size of $260.79 billion.

In April 2019, The Financial Times reported that European carbon allowances within the European Union Emissions Trading System were the world’s top-performing commodity over the past two years. China’s emissions trading market is expected to launch by the end of 2021. Once fully implemented, it will be the largest carbon allowance market in the world, which may provide an additional catalyst for the performance of the global carbon allowance market.

Looking ahead, the market is expected to grow as more regions try to achieve their net-zero carbon targets. For example, the European Union will reach its legally binding target to cut emissions to 55% below 1990 levels by 2030. It has issued a package of 13 proposals to expand and revise the EU ETS, such as reducing the number of permits in circulation each year at a faster rate than the current one.

Listen to the Full Podcast Episode on KRBN: