You are at:Home»Investing»ETF Investors Turn Risk-Off, Fleeing Toward Fixed-Income 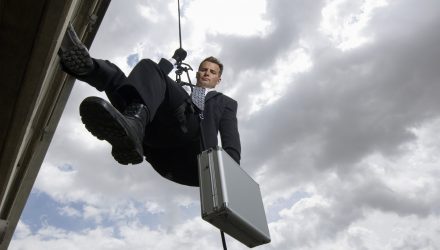 In the wake of an escalating trade war between the U.S. and China, ETF investors turned risk-off and fled toward the relative safety of fixed-income assets.

In light of the heightened tariff concerns, the deconstruction of global synchronized growth and further interest rate hikes out of the Federal Reserve, fund investors have cut down on stock purchases and headed toward fixed-income instead, Bloomberg reports.

Specifically, bond ETFs attracted $4.6 billion in July, or almost double the total flows into equity ETFs and the most of any asset class. The robust inflows into bond ETFs follows the $7.5 billion added to fixed-income ETFs in June, whereas equity exchange traded products experienced $7.2 billion in outflows.

For example, the iShares Core U.S. Treasury Bond ETF (NYSEArca: GOVT) has been among the more popular plays, taking in $828 million in net inflows since mid-June. The Vanguard Short-Term Government Bond ETF (NYSEArca: VGSH) also seen larger than normal inflows over the same period as investors turned to safety and tried to hedge rate risk by shifting toward the shorter end of the yield curve.