You are at:Home»Equity ETFs»ETF Investors Look to Japan’s Strong Fundamentals 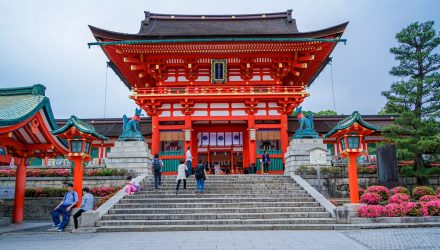 Beyond the support of rising investment demand for Japanese equities to prop up the market, Japan boasts strong fundamentals that may maintain its economic and market growth ahead. For instance, Woodham pointed out that Deutsche Bank recently upgraded the Japanese market form its previous neutral stance due to corporate structural reforms, rising return on equity, reduced cash hoards and increased dividends, which the strategist described as a “very positive sign.”

Further supporting the play, Japanese equities are growing less correlated to the whims of its yen currency. Traders have typically driven up Japanese equities in light of a weak yen currency due to the economy’s heavy reliance on exports as a weaker currency makes their products more competitive on the global market. However, Woodham pointed out that this relationship is beginning to come undone in recent months, which means there may be less currency risk associated with the market if the currency were to strengthen.

Consequently, Woodham argued investors should see that fundamentals will now drive returns ahead.

Nevertheless, if investors are worried about currency risk or the negative effects of a depreciating yen currency on Japanese equity returns, one may look to currency-hedged Japan ETF options to play the market. For example, the Deutsche X-trackers MSCI Japan Hedged Equity ETF (NYSEArca: DBJP) is one options to access Japanese equities markets while hedging against foreign exchange risks.

For more information on the Japanese market, visit our Japan category.e