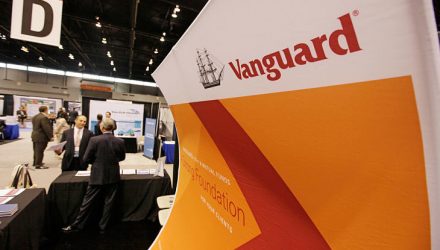 What’s Next for Vanguard ETFs?

When an elephant prepares to take steps in the jungle, the other animals should take notice. Such an analogy is appropriate with Vanguard and the ETF market as the average Vanguard product has $10 billion in assets under management and the firm gathered $50 billion in assets through the first four months of 2017, second only to industry heavyweight iShares’ $78 billion, according to Factset data.

Unlike some ETF providers, Vanguard has been more prudent in expanding its product lineup, with just three new offerings since the beginning of 2014 and 70 in total; CFRA has data on 162 ETFs launched since 2014 from the three other top-four providers. Yet, in late May, Vanguard updated its regulatory filings to potentially launch transparent, actively managed ETFs, giving CFRA confidence that the firm is providing additional insight to regulators ahead of hopeful approval. Given the firm’s success in managing active strategies and its ability to retain and grow assets despite competitive pressure from passive products, CFRA thinks Vanguard will have continued success with such future iterations. However, our crystal ball on possible timing is much cloudier.

To protect shareholders from some of the transparency risks, CFRA thinks Vanguard could launch a quantitative active equity approach, similar in style to the mutual fund Vanguard Strategic Equity Income Fund (VSEQX). For this existing fund, Vanguard’s quant group relies on a computer-driven stock selection process to build a portfolio with a similar risk profile to an MSCI small/mid-cap blended index, while seeking to generate better returns.

Regular CFRA ETF Trends & Ideas readers will recognize some of these attributes as consistent with the general philosophy many asset managers, including Franklin Templeton, Goldman Sachs, and John Hancock have communicated with their multi-factor ETFs. However, CFRA thinks Vanguard will keep management’s discretion on whether to buy or sell a stock, rather than creating an index to track that could be potentially front run.