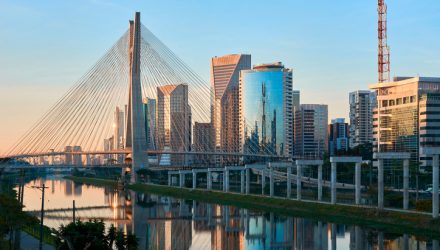 Following one of their worst drops since the financial down turn, Brazil exchange traded funds experienced large investment interest as traders tried to capitalize on a cheap, oversold market.

According to EPFR data, over $750 million flowed into Brazilian stock funds in the week ended May 24, with most of the inflows coming from institutional investments in ETFs, reports Eric Platt for the Financial Times.

For instance, the iShares MSCI Brazil Capped ETF (NYSEArca: EWZ) experienced $514.6 million in net inflows for the week ended May 24, according to ETF.com.

The sudden influx in asset flows comes off a 9% plunge in the benchmark Bovespa last Thursday with a brief halt in trading after circuit breakers were triggered. The sudden risk-off condition came in the wake of graft charges laid on President Michel Temer and calls for a replacement for the president.

“For those investors that have the stomach, all the more power to you,” Brian Jacobsen, an emerging markets strategist with Wells Fargo Fund Management, told Financial Times, referring to inflows to Brazil country-specific ETFs. “Our equity emerging market managers view it as a good opportunity to get into Brazil because they see the political situation as noise overshadowing the fundamental improvement they believe is to come.”