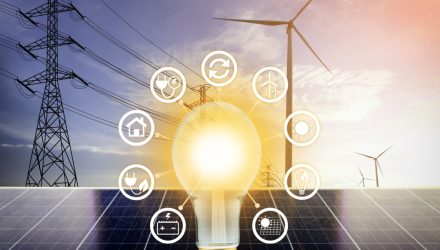 This Clean Energy ETF Is Perking Up

The $1.8 billion PBW follows the WilderHill Clean Energy Index and is fast approaching its 17th birthday, making it one of the elder statesmen of the clean energy ETF arena. A fund like PBW is home to companies that are supposed to be antidotes to traditional fossil fuels, and while the renewable transition is well underway and gaining momentum, rapid adoption is running into issues.

Those issues include governments turning to coal and natural gas to heat homes and keep businesses running, weighing on renewable energy equities in the process.

“For now governments may find themselves compelled to support greater use of fossil fuels – particularly gas – amid energy supply shortages,” according to BlackRock research. “Natural gas may emit less carbon than oil or coal, but its largest component methane is another potent greenhouse gas. It too will ultimately need to be phased out if the world is to reach net-zero. The phase-out of natural gas and momentum toward net zero therefore rest on accelerating the development of clean energy supply.”

The lay of the renewable energy land today is that many governments made the move to solar, wind, and the like rapidly and didn’t allot for longer transition periods. Now, they need coal and natural gas to fill voids.

What that says is that ETFs such as PBW aren’t going to move up in a straight line and that there will be bumps along the way. Government missteps do not, however, dent the broader long-term thesis for PBW. The Invesco fund has some avenues for mitigating volatility caused by a rocky transition to renewables. For example, the fund has diversity, featuring exposure to electric vehicle, hydrogen, lithium, and solar stocks, among others.

That diversification is meaningful because it proves that PBW isn’t levered to a small number of clean energy themes, and it might just be one reason that the fund is higher by almost 7% over the past month. Plus, the good news for long-term PBW investors is that there’s still massive spending required to fortify renewables adoption.

“There has been massive investment in clean energy – an average of $1 trillion a year between 2016 and 2020 according to the International Energy Agency (IEA). More is needed to build a clean, resilient energy infrastructure. A net-zero transition by 2050 will require an average annual investment of nearly $4 trillion between 2026 and 2030, says the IEA. A successful transition will not only need clean energy, but also new technologies to store and distribute clean energy, to decarbonize manufacturing, agriculture and transport, and to capture carbon emissions,” concludes BlackRock.