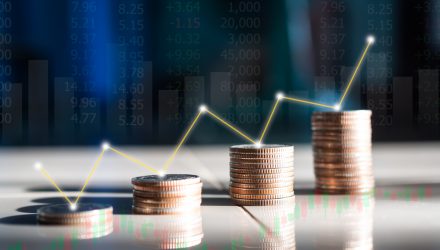 However, some mid cap exchange traded funds are standing out. For example, the Invesco S&P MidCap 400 Pure Value ETF (RFV) is up 28.13% year-to-date, beating both the S&P MidCap 400 Index and the large cap S&P 500.

Home to 101 stocks, the $161 million RFV follows the S&P MidCap 400® Pure Value Index, in which value is “measured by the following risk factors: book value-to-price ratio, earnings-to-price ratio and sales-to-price ratio,” according to Invesco.

The broader mid cap universe tends to lean more cyclical in its sector allocations, a trait Invesco’s RFV ratchets up by way of its emphasis on deep value. Amid rising Treasury yields and enthusiasm for the reopening trade, clear cyclical exposure worked for a good portion of the first half of the year before the trade encountered some difficulty late in the second quarter and last month.

However, some strategists believe it’s time to revisit mid cap cyclicals. In a recent note to clients, Bank of America strategists led by David Harris say they are trimming exposure to communication services, healthcare, and technology stocks in their mid-cap model portfolio. Healthcare is considered a defensive sector while the other two are economically sensitive or growth sectors.

Those three sectors combine for just 15.1% of RFV’s weight, according to Invesco data.

RFV’s massive financial services exposure is potentially beneficial on two fronts. First, many of the ETFs are highly correlated to Treasury yields, meaning that if those yields rise again later this year, RFV could have fuel for more upside. Second, some RFV financial components could be credible buyers and sellers if consolidation increases in that sector.