You are at:Home»ETF Education channel»Ride Value’s Resurgence in Pure Fashion with ‘RPV’ 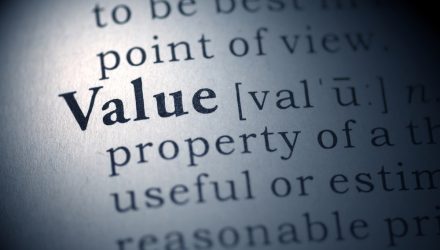 Value stocks are back in fashion, but investors mulling access via exchange traded funds should consider those funds’ purity. That’s a bell answered by the Invesco S&P 500® Pure Value ETF (RPV).

RPV maintains a “pure value” focus, holding a relatively small number of firms that demonstrate the most significant value characteristics.

The fund is a more targeted choice for those investors who are seeking to focus explicitly on value companies. Not surprisingly, RPV exhibits a bias toward certain sector of the U.S. economy, generally tilting exposure towards financial companies, which is a benefit as Treasury yields rise.

“After a 14-year stretch of outperformance for growth stocks compared to value, investors seem to finally be rewarding the left-behind names. That makes sense: value sectors tend to do better at the start of an economic cycle, after all. But there have been several value head fakes over the years, and growthier names grab more headlines,” reports Andrea Riquier for MarketWatch.

Why Now for RPV

Gone are the days when the FAANGs (Facebook, Amazon, Apple, Netflix, Google) ruled the earth, at least for now. The rotation to value has been exceedingly apparent through the lens of 2021 ETF inflows.

“We still see more upside in value relative to growth over the next 12 months given value’s dramatic longer-term underperformance as well as the U.S. economy being on the cusp of the best growth in more than 35 years,” they added. “It would not be unusual to see value consolidate some of its recent outperformance, but we would stick with the value trend and use any short-term setbacks to add to the position.”

The reversal of fortunes for the value play has been years in the making after big growth names, notably technology stocks, outperformed since the financial crisis.

Many look to the more attractive valuations in the value segment, especially after a rally last year that elevated prices on technology and growth names. At the end of February, the Russell 1000 Value Index was hovering around 21.89 times the past 12 months’ earnings, according to FTSE Russell. In comparison, the Russell 1000 Growth Index was trading at around 37.22 times earnings.