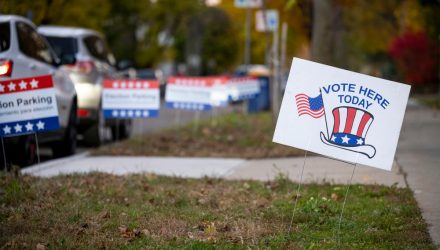 Election Day Positioning Could Be Meaningful for These Invesco ETFs

2022’s midterm election day is less than two weeks away, confirming investors are right to ponder how various outcomes will affect risk assets. What Congress will look like after the election remains to be seen, but at the moment, consensus is building that government will be dividend after the votes are counted. One of the most effective ways to approach election-related approaches is to leave stock picking to pros and embrace broad-based funds such as the Invesco QQQ Trust (QQQ) and the Invesco NASDAQ 100 ETF (QQQM).

QQQ and QQQM don’t track the S&P 500. Rather, the Invesco ETFs follow the Nasdaq-100 Index, but the index is often highly correlated with the S&P 500, indicating there could be merit in evaluating these funds in advance of and after Election Day.

“Whether it’s a presidential election or a midterm election, the index (S&P 500) has performed very well in the preceding couple of weeks. I was surprised to see volatility muted heading into the election. Off years have a higher standard deviation of returns than election years,” notes Schaffer’s Investment Research Senior Quantitative Analyst Rocky White. “One theory could be that investors are hopeful about the upcoming elections but waiting for the results before making big moves.”

In what could be good news for QQQ and QQQM, Schaeffer’s data indicate that in the previous 18 midterm election years, the S&P 500 moved higher over the two weeks leading up to the election, posting an average gain of 1.50%.

Regarding QQQ and QQQM’s near-term, election-related fortunes, it pays to remember history doesn’t always repeat, but it often rhymes. To that end, it’s worth noting the S&P 500 has a noteworthy post-Election track record.

For investors looking to hold QQQ or QQQM over longer holding periods, it’s worth noting that over the past 18 midterm election years, the S&P 500 was higher six months following the election, as noted by Schaeffer’s.