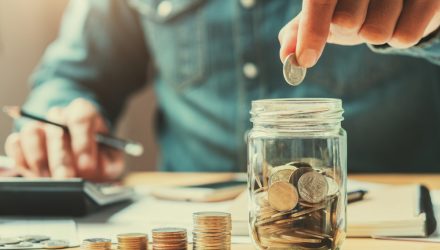 Dollar ETF May Have More Green to Offer

UUP, which tracks the Deutsche Bank Long USD Currency Portfolio Index – Excess Return, could perk up over the next several months for an interesting reason. The greenback has been mostly listless of late as currency traders await more clues from the Federal Reserve regarding the tapering of asset buying and the timeline for interest rate hikes.

That sluggishness has some traders thinking the path of least resistance for the dollar over the next few months is higher.

“Eventual Fed tapering of its $120 billion of monthly bond purchases, which an over 75% majority of 51 analysts expected the central bank to announce in the final quarter of this year, should help U.S. Treasury yields to move higher,” reports Reuters.

Indeed, the central bank will eventually taper bond buying, but that plan could be delayed a bit. The August jobs report delivered last Friday missed economists’ forecasts by a wide margin, stoking speculation that the Fed will delay its tapering move. That could be constructive for the dollar and UUP. Data indicate that some traders concur with that sentiment.

“Data from the U.S. Commodity Futures Trading Commission released on Aug. 27 showed speculators had once again increased their net long U.S. dollar positions,” according to Reuters. “But underscoring the prevailing uncertainty, there was no consensus among analysts who answered an additional question on how the dollar would trade over the next three months.”

UUP gauges greenback price action against a basket of major developed foreign currencies, including the euro, Japanese yen, British pound, Canadian dollar, Swedish krona, and Swiss franc. The Eurozone and Japan are unlikely to move towards any action that results in strong currencies, and with the U.K. economy looking somewhat sturdy, the Bank of England may not want to mess with a good thing by entertaining rate hikes.

Along those lines, it’s not surprising that of 60 currency traders and strategists surveyed by Reuters, 25 said they expect the dollar to trade “broadly higher.” At the same time, 23 see the greenback hovering around current levels. The remaining 12 are betting on declines over the next 12 months.