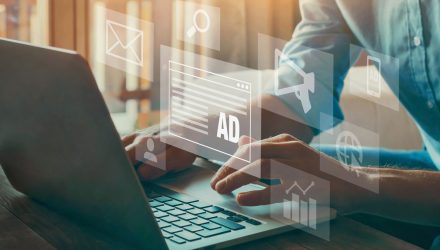 Digital Advertising Spending Retreat May Not Dent These ETFs

Amid increasing concerns that a recession will arrive at some point in 2023, investors are rightfully concerned about the outlook for shares of companies with ties to digital advertising.

Whether it’s digital or traditional, reduced advertising expenditures are one of the typical responses to a slowing economy. In theory, that could be a problem for exchange traded funds such as the Invesco QQQ Trust (QQQ) and the Invesco NASDAQ 100 ETF (QQQM). However, some analysts believe digital ad-related equities, some of which reside in QQQ and QQQM, could prove surprisingly durable in 2023.

Those are reduced forecasts and they are pertinent to Google parent Alphabet (NASDAQ: GOOG) and Facebook parent Meta Platforms (NASDAQ: META), which are the two behemoths in the digital ad space. Those stocks combine for over 10% of the QQQ and QQQM portfolios. Still, there are some areas of potential strength for the digital ad space.

“Advertising technology continues to increase efficiency in digital advertising by automating the aggregation of ad supply and demand and enabling analytics of data from different sources to improve ad returns on investments,” added Mogharabi.

Another factor that could work in favor of companies with ties to digital ad spending is that while 2023 isn’t an election year, it precedes the 2024 presidential campaign. With an open field for the Republican nomination, the primary season could kick off early – at some point later this year – and that could lead to added revenue for digital ad firms.

“We expect further macro and data access pressures on ad spending, lowering our forecast for total and digital ad spending growth for 2022 and 2023, followed by higher acceleration than initially anticipated in 2024, helped in part by the U.S. presidential election,” concluded Mogharabi.

Plus, specific to Alphabet and Meta, while coming off disappointing 2022 equity market showings, both companies have plenty of avenues for augmenting weakness in the digital ad realm. For example, Alphabet is one of the largest cloud computing companies and 2023 may be a redemption story for Meta’s burgeoning metaverse plans.