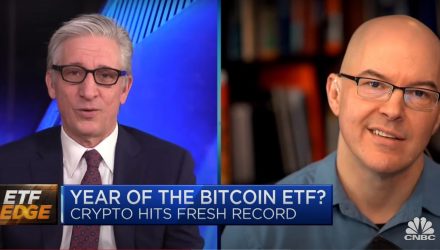 On the heels of Tesla’s announcement that it has bought $1.5 billion worth of bitcoin, this week’s ETF Edge, once again, puts a focus on the possibility of the long-awaited bitcoin ETF. ETF Trends’ CIO and Director of Research, Dave Nadig, joins CNBC host Bob Pisani, along with CEO and founder of KKM Financial, Jeff Kilburg, to discuss this prospect and more.

Looking at why 2021 would finally be a good year for the SEC to approve a bitcoin ETF, Kilburg explains how the cryptocurrency is riding high at nearly 45,000, allowing for a confluence of exciting data. That said, over the years, the SEC has said no many times in the past based on several hurdles that came with a lack of maturity, despite evidence to the contrary. However, becoming more comfortable with bitcoin and crypto, in general, is only going to continue working in its favor.

Additionally, having Tesla is the news for their bitcoin purchase is only going to help as well. The great exposure can go a long way in the SEC seeing things in action that will add to their understanding of how secure bitcoin can be, let alone understand how a regulated ETF can be traded more accurately to the actual spot price of bitcoin. It’s a win-win solution for all active and passive investors.

Looking to Nadig for whether or not maturity will be a reason for SEC to consider a bitcoin ETF, there’s an understanding that this has contributed to rejections in the past. However, there is a deeper understanding of crypto that is ideally a good sign. Still, Nadig feels 2022 may be a more accurate time to think this ETF may come to fruition.

Nadig adds, “I do think it’s inevitable, and I think we’re starting to make that progress towards a sort of fully liquid, fully exchange traded crypto vehicle of some sort, whether it shows up in a traditional ETF or not.”

The success of things like BITW and GBTC, which are pink sheet traded companies that happen to own cryptocurrencies, as opposed to ETFs, is likely going to help force the SEC’s hand. With Tesla making bitcoin a major balance sheet asset and companies where it’s their whole balance sheet asset, it will be hard for the SEC to keep saying no.

As far as the possibility of incredible volatility based on fears concerning a lack of stronger international regulations, Nadig still feels things are at a turning point, as the SEC does have to do something, whether that’s relying on a structure that everyone understands or make a stance against crypto, which no one wants to see.