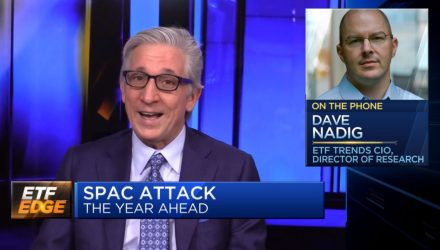 This year, there has been an impressive amount of growth in relation to SPACs (Special-purpose acquisition company). At the same time, their reputation has not always been the greatest.

ETF Trends Director of Research and CIO, Dave Nadig, was on hand, along with Renaissance Capital Chairman and Co-Founder Kathleen Smith, on this week’s “ETF Edge” with host Bob Pisani to discuss the recent boom for SPACs, along with aspects that may create a challenge.

Nadig explains how there’s a good reason why SPACs are different from IPOs, which has to do with how, fundamentally, SPACs let come to market with some pros and cons.

They have slightly less scrutiny, as the amount of work it takes to get a SPAC merger done into a SPAC vehicle is simply less exhaustive than it would be if investors were going through the full IPO process. However, on the other side, it allows a company that may not have a long operating history but can say very positive and credible things about the future to come to market and actually talk about those things.

“Companies that come to market through a SPAC merger are allowed to things like give forward guidance.” Says Nadig.

He explains how anyone who knows about the IPO process or is invested in them already can get locked down hard. So, there’s not really a chance to ask management companies about 2021 trajectories, but that is possible with a SPAC.

Aspects like this are among the reasons why SPACs are an attractive vehicle, particularly where smaller growth companies that often come out of a private equity build.

“SPACs are becoming this vehicle for companies to go from private to private equity to the public markets, in a sort of long, thin line.”

As far as what could go wrong on an independent level, in a dramatic way, Nadig notes how, with all of the SPACs looking for targets, there will naturally be winners and losers. Like any disparate market, a SPAC or an IPO fund will invest in all of them. That said, given the success, it’s hard to argue that approach.

However, those potential excess returns also mean there are enormous risks. Additionally, what investors get in something like a SPAC or an IPO fund is the last tail end of private equity, and it tends to be related to what’s on the cutting edge, increasing the chances of areas that can get cut.

Watch The Whole IPO vs. SPAC Conversation With Dave Nadig: