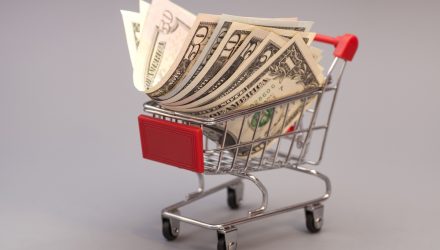 Among economists and other market observers, there’s widespread belief that consumer discretionary spending will be crimped by still-lingering high inflation and a recession possibly arriving later this year.

However, analysts see some resilience building among a variety of travel-related stocks, which could bode well for exchange traded funds such as the ALPS Global Travel Beneficiaries ETF (JRNY). JRNY is a relevant consumer cyclical idea this year because there’s a shift happening to services from goods when it comes to discretionary spending.

“The reallocation of discretionary income to services from goods stands to benefit travel-related companies. Services spending has averaged 4% growth while goods spending has averaged a 1% decline year over year in the last six months,” according to Morningstar. “The spending on services helped occupancy levels across the hotels and cruise lines we cover rise to 75% on average in the third quarter of 2022, a roughly 20-point increase from the year-ago period. This compares with a 30-point year-over-year increase in the second quarter.”

Currently, JRNY isn’t heavily allocated to cruise operators, but the ALPS ETF features strong exposure to airlines and travel booking sites — industries with ties to an uptick in cruise bookings. One of Morningstar’s top picks among booking sites is JRNY holding Expedia (NASDAQ:EXPE).

“We believe Expedia shares are discounting enduring travel demand and investments that the company has made in the past few years, which should drive expanding operating margins and ongoing sales growth while supporting the company’s network effect,” noted the research firm.

Another perk with JRNY is its exposure to casino operators on the Las Vegas Strip, including Caesars Entertainment (NASDAQ:CZR), MGM Resorts International (NYSE:MGM), and Wynn Resorts (NASDAQ:WYNN).

While casino visits are an easy way for consumers to cut back in a rough economy, the Strip could prove resilient this year as convention business rebounds from the coronavirus nadir and due to a strong sports event calendar, including the F1 race in November — the first in Las Vegas in four decades. MGM, the largest Strip operator and a JRNY holding, is a favorite among analysts due to its mix of Las Vegas, regional, Macau, and digital exposure via its 50% stake in BetMGM.

“For digital, we expect for BetMGM to grow ~15%+ in ’23 and continue to believe there are opportunities to solve for the 50/50 stake. With one of the strongest balance sheets, supportive shareholders, and a goal to be a global digital leader, we expect this to be a priority. Lastly, we believe MGM China (evidenced by MGM China early ’22 stock performance) is not being appropriately reflected in the stock,” wrote Macquarie analyst Chad Beynon in a report out last week.