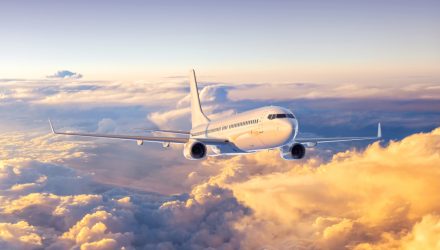 While July marked the first monthly TPI decline since January 2022 and the strongest decline since April 2020 on a year-over-year basis, TPI growth (+11.5%) was considerably lower than it was in June (+17.5%), but it remained higher than CPI (+8.5%) in July, according to the U.S. Travel Association.

There are many ETFs available for investors that offer broad exposure to the rebounding travel industry. Three popular options are the ALPS Global Travel Beneficiaries ETF (JRNY) and the Defiance Hotel Airline and Cruise ETF (CRUZ).

The two funds have rebounded meaningfully in the past month. JRNY and CRUZ have increased 15.6% and 13.3%, respectively, over a one-month period. Year-to-date, the funds are down -13.3% and -19.4%, respectively.

JRNY is the more diversified of the two offerings and carries an expense ratio of 65 basis points, slightly higher than the category average of 62 basis points. The fund has garnered $12.3 million in assets under management since its inception in September 2021, according to VettaFi.

CRUZ is the cheaper option in the segment, carrying an expense ratio of 45 basis points.