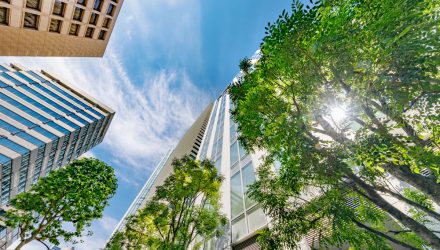 The $924.63 million ACES, which turns three years old next week, doesn’t home in on a specific clean energy niche. Rather, it provides exposure to nearly 10 industries, including the solar space. Solar stocks are the fund’s largest industry representation at 23%.

That’s a fitting weight given that solar is one of the most accessible clean energy concepts, a technology increasingly embraced by both companies and individual homeowners. In fact, solar’s consumer-facing opportunity via residential installs could bode well for ACES over the near-term and for years to come. Goldman Sachs is forecasting big growth for residential solar, reports Pippa Stevens for CNBC.

“Deployment volumes have moved up in almost linear fashion over the past couple of years, and we expect the trends to continue in the near-medium term,” said the bank in a recent note to clients.

“Enphase Energy and SolarEdge Technologies are two ways Goldman suggests gaining exposure to the energy storage market, and the firm has a buy rating on each stock,” according to CNBC.

As of June 18, Enphase (ENPH) is the second-largest component in the ALPS ETF at a weight of 5.91%. SolarEdge (SEDG), a maker of microinverters, isn’t yet a member of the ACES roster. However, investors shouldn’t be deterred by that fact because the fund features exposure to other residential solar names Goldman is bullish on.

The bank is enthusiastic about the prospects for Sunrun (RUN), which Goldman previously dubbed a “bellwether,” and Sunnova Energy International (NOVA) – two of the dominant names when it comes to residential solar installation.

“Goldman noted that Sunrun expects installations of its Brightbox system to more than double year over year during 2021. The company has expanded the product’s footprint over the last year, and it’s now offered in 21 states and territories, compared with 12 a year ago,” according to CNBC.

As of June 18, Sunrun is the largest holding in ACES at a weight of almost 6%, while Sunnova commands a weight of 2.45%.