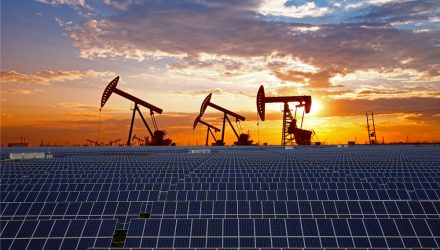 Since the advent of the investable renewable energy industry, one of the most commonly replayed scenarios is shares of these companies rallying as oil prices soar.

Owing in large part to Russia’s invasion of Ukraine, oil prices are again surging, and that’s providing tangible benefits to renewable energy equities and the related exchange traded funds. Take the case of the ALPS Clean Energy ETF (ACES). After positing a modest Tuesday gain on above-average volume, ACES is higher by 15.06% over the past week. The S&P 500 is up just 0.1% over the same span.

“While that’s been a boost for traditional oil and gas stocks, renewables have been on a strong run. Solar specialist Sunrun (RUN) has gained 33% since the invasion began, Sunnova Energy International (NOVA) is up 32%, and Sunlight Financial (SUNL) is up 26%. NextEra Energy (NEE), the world’s largest producer of wind and solar energy, has risen 7%,” writes Morningstar analyst Leslie Norton.

Sunrun accounts for over 4% of the ACES roster, while Sunnova Energy International checks in at 2.08%. What’s interesting about ACES’ recent bullishness is that it arrives against the backdrop of uncertainty and geopolitical tensions.

Said another way, owing to their status as often smaller growth names, renewable energy stocks often languish when equity market volatility is high. However, ACES is clearly defying those odds as of late.

“Ordinarily, renewable plays suffer when investors flee from risk. In addition, a surge in oil prices might attract investors to fossil fuel companies. But the invasion underscored Europe’s own energy demands and overdependence on Russian gas,” adds Norton.

A case can be made that the Russia-Ukraine scenario is boosting ACES because it’s a reminder that the U.S. needs to be energy independent, and renewables play an increasingly significant part in that effort.

“Instead, the invasion underlines the importance of energy independence. In the United States, for example, a winter storm is rolling into Texas, just a year after a winter storm left millions without access to electricity for days. That has made solar and other renewable energies more valuable,” concludes Morningstar’s Norton.