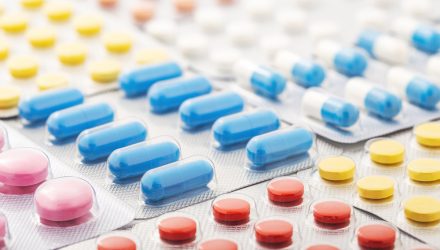 The biotech sector was propelled last week by long-awaited breakthrough Alzheimer’s trial data. Despite major macro headwinds for U.S. stocks, SBIO’s small- to mid-cap (SMID) biotech holdings that focus on later-stage drug trials continued to show their resilience and uncorrelated characteristics in a weak third quarter for U.S. markets, rising nearly 9% while the S&P 500 dipped nearly 5%, according to an October 3 insight from ALPS.

Biogen (BIIB, not in SBIO) last week released promising Phase III trial data for its Alzheimer’s immunotherapy that reduced cognitive decline by 27% in patients by inhibiting the production of amyloid plaque in the brain, once again putting the spotlight on the success of using immunotherapy antibodies to treat unmet medical diseases, according to ALPS.

SBIO immunotherapy company, Prothena Corp Plc. (PRTA, 1.57% weight as of September 30), soared over 97% on the news, with its similar Alzheimer’s therapy expected to show results in 2023, ALPS wrote. Other immunotherapy companies in SBIO developing different treatments for cancer, rare and orphan diseases, neurology, cardiology, and hematology also rallied last week on the news.

“The biotech industry has made considerable headway in life-saving drug development since the pandemic, although these underlying catalysts have been muddied by lackluster stock returns as interest rates have risen over the past year,” ALPS wrote.

FDA approvals for new chemical entities (leading to breakthrough immunotherapy drugs) saw 25% growth in 2021, outpacing year-over-year growth dating back to 2017, according to ALPS.

That is expected to continue in 2022, highlighting the innovation through increasing research and development in biotech. The forthcoming approval of Biogen’s effective Alzheimer’s immunotherapy treatment, likely in January 2023, reflects a milestone for immunotherapy research, in which 87% of SBIO’s holdings utilize immunotherapy in their portfolio of treatments, according to ALPS.