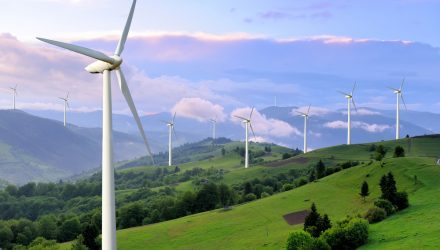 ENFR tracks the Alerian Midstream Energy Select Index (CME: AMEI). ENFR acts as a type of hybrid energy infrastructure ETF, which could help investors capture some of the high yields from MLPs but limits the tax hit from solely owning MLPs. Importantly, many midstream MLPs and energy infrastructure companies are looking to bolster their renewables exposure.

“Even as pipeline executives stuck by their traditional position that natural gas is a bridge between society’s fossil fuel present and a renewable energy future, they have begun to offer more details about how the midstream sector can accommodate cleaner fuels,” reports S&P Global Market Intelligence.

Changing With The Times

Companies must adapt to shifting market conditions are risk being left behind or worse. This particularly in the energy sector where renewables continue pilfering market share and investors from fossil fuel producers.

However, some traditional energy companies see the writing on the wall and are changing with the times. That includes midstream names, including some residing in

“There is a growing consensus that the midstream sector will need to get into the renewable energy infrastructure business to grow long-term as demand for traditional pipeline assets winds down, according to Regulatory Research Associates analyst Brian Collins,” according to S&P Global.

Renewable energy, which includes solar, wind, geothermal, hydroelectric, and other low carbon sources, is commanding an increasing share of the energy landscape, meaning it’s not only prescient for midstream operators to move into space, but potentially profitable, too.

“Kinder Morgan’s pipeline peer Williams Cos. Inc. has already committed to investing in new solar installations and renewable natural gas projects as it plans to become a net-zero carbon emitter in 2050. Those renewable gas opportunities — combined with “next-generation” technologies like carbon capture, use and storage, and with the use of hydrogen as a fuel source — could account for more than 50% of emissions reductions during that period, according to the company’s plan,” reports S&P Global.