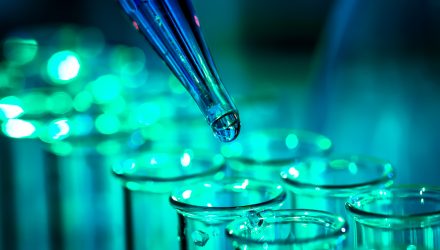 Memeification of Biotech Stocks Shines Light on This ETF

Biotechnology stocks are healthcare laggards this year, and much of the lagging is concentrated in the small- and mid-cap biotech spaces.

However, retail traders are embracing some speculative small-cap biotechnology names, and that could highlight the advantages offered by the ALPS Medical Breakthroughs ETF (SBIO).

“Two tiny biotechs, ISpecimen Inc. and Longeveron Inc., are the latest to see their stocks more than double in a social media-fueled frenzy ahead of a U.S. trading holiday,” reports Cristin Flanagan for Bloomberg. “ISpecimen more than doubled at the open on Tuesday, triggering a volatility halt. It was trading up 53% at 10 a.m. Almost 18 million shares traded hands, surprising for a stock with a float of less than 500,000 shares, according to data compiled by Bloomberg. The stock is majority held by individuals and about 44% is held by insiders.”

For its part, SBIO only holds companies with market values of $200 million to $5 billion, putting it firmly in small-cap to the lower end of mid-cap territory. On that basis, Longeveron could be an SBIO component, but at a market cap of less than $61 million, ISpecimen is out of the running for now.

“Day traders are still chasing after electronic vehicle stocks like Rivian Automotive Inc. and Lucid Group Inc. as well as big tech names Nvidia Corp. and Apple Inc. On Monday, they added ISpecimen, which connects human samples with researchers, and Longeveron, a cell therapy company, to their watch lists and the stocks soared 80% and 181%, respectively that day,” according to Bloomberg.

All that sounds nice, but Longeveron slid nearly 40% yesterday, underscoring the point that small, speculative biotechnology stocks can taketh away as fast as they giveth. To that point, SBIO mitigates some of that risk.

In addition to the aforementioned market cap requirement, SBIO holdings must have at least one drug or therapy in Phase II or Phase III clinical trials. That dramatically reduces speculation within the SBIO portfolio while still levering the fund to positive trial news. SBIO, which is nearly seven years old, follows the S-Network Medical Breakthroughs Index.