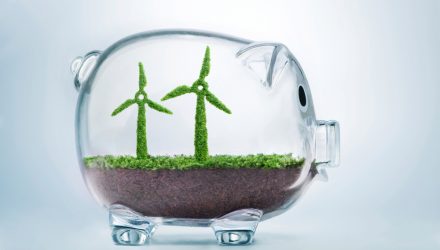 Renewable energy exchange traded funds, including the ALPS Clean Energy ETF (ACES), could soon re-enter the limelight thanks to the familiar catalyst of domestic politics.

Earlier this week, Senate Democrats reached a $3.5 trillion budget resolution that provides for much of President Biden’s ambitious renewable energy agenda – the very thing that stoked the fires of ACES and rival ETFs during the 2020 presidential campaign.

A day later, the Senate Energy and Natural Resources Committee moved forward a $98 billion bill aimed at shoring up the ailing U.S. power grid while easing requirements related to domestic mining of rare earth minerals. That’s relevant to ACES investors because the ETF devotes 19.36% of its weight to efficiency, LED, and smart grid stocks. Rare earth metals are also critical components in an assortment of clean energy technologies.

See also: Rare Earth, Real Returns: This ETF Is Up Over 125%

“Biden and congressional Democrats have been pursuing a two-track process for advancing infrastructure legislation. The first involves a $579 billion bipartisan infrastructure agreement the president reached with a group of senators in June,” reports S&P Global Market Intelligence.

Work Still to Be Done

Advancing President Biden’s renewable energy agenda is a big positive for ACES. Large-scale federal spending on green energy has been a long time coming and is now a pressing matter as evidence mounts that climate change is an existential threat on a variety of fronts.

However, passing legislation via budget reconciliation is contentious move in its own right, one that’s only amplified in today’s bitterly partisan environment. As is often the case, unresolved politics will factor into the renewable energy investment thesis.

“The second, more contentious track involves a budget reconciliation package Democrats will likely have to pass without GOP support that would contain more aggressive climate measures. But reconciliation measures only need support from a simple majority to pass the Senate and U.S. House of Representatives. Provisions can only be attached to a reconciliation bill if they change the federal budget, however, meaning nongermane policy items must be left out,” according to S&P Global.