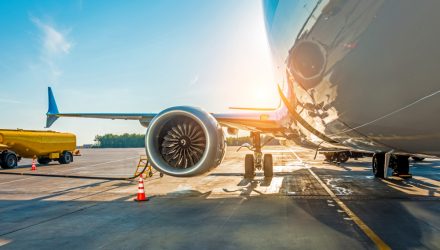 High Oil Prices Not Yet Denting Demand for Air Travel

Along with labor, fuel is one of the largest input costs faced by airlines. Said differently, it’s practically guaranteed that when oil prices soar, as is happening today, carriers pass those higher costs onto customers in the form of higher fares.

JRNY, which follows the S-Network Global Travel Index, isn’t a dedicated airline ETF, but it does allocate 28% of its weight to the industrial sector, which is where airlines and publicly traded airport operators reside.

Even with high oil prices, the arrival of spring break could be a positive for JRNY. Americans are scheduling flights at about double the rate they were a year ago, flocking to familiar tourist destinations such as Las Vegas, Orlando, Miami, and Los Angeles, reports Barron’s.

That’s despite the fact that as of March 11, the average domestic round trip airfare was $304, up from $235 a year ago. Speaking of commodities-related inflation, airfares are forecast to rise 7% a month through June with the biggest increases occurring this month, according to Barron’s.

Adding to the case for JRNY as an airline play, analysts see North American air travel returning to pre-coronavirus pandemic levels next year.

Another positive for the ALPS ETF is its exposure to casino equities. As noted above, Las Vegas is one of this year’s most-visited domestic destinations.

“We believe the fundamental environment for Las Vegas and regional casinos is expected to sustain its recent strength in demand, pricing and profitability,” said Jefferies in a recent note to clients.

JRNY components Caesars Entertainment (NASDAQ:CZR) and MGM Resorts International (NYSE:MGM) are the largest operators on the Las Vegas Strip, and each has an extensive regional casino portfolio. Many of those venues are drivable from large population centers, indicating that those operators may not be as vulnerable to high jet fuel prices as recent share price declines indicate.

“We believe 2022 could shape up better than investors expect, where stocks are pricing in EBITDA declines. However, until older demographics begin to return, we see investors looking past resilient monthly GGR. Rather, investors might have to wait until later this spring for multiples to rebound,” said Roth Capital analyst Edward Engel in a recent note on gaming equities.