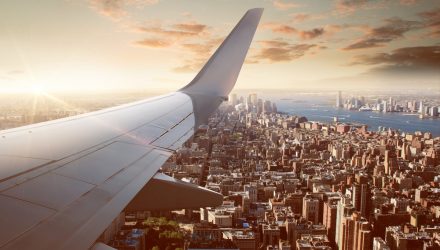 Flight Delays Pinch Travelers, but Airlines Will Be All Right

From December 24, 2021, through January 4, 2022, more than 20,000 flights were canceled worldwide. Obviously, that’s problematic for passengers, but investors thinking that’s going to be a persistent drag on airlines equity and debt might want to think otherwise.

In theory, scrapped flights should mean lost revenue and profits, but Moody’s Investors Service sees limited financial strain for carriers stemming from the recent spate of cancellations. That could prove to be a point in favor of assets such as the ALPS Global Travel Beneficiaries ETF (NYSEARCA: JRNY).

JRNY isn’t a dedicated airline exchange traded fund, but the bulk of its nearly 28% weight to the industrial sector is assigned to airline stocks. That puts investors into the airline game without the risks associated with what can be a notoriously volatile industry.

“We expect the financial effect of the cancellations to be modest, marginally lowering operating cash flow in these weeks. Incentive compensation to support flight crew staffing will be the major cost pressure point,” says Moody’s. “The staffing challenges caused by the rapid spread of the Omicron variant will ease as daily infection rates decline, enabling airlines to quickly improve their operating performance relative to the past few weeks.”

JRNY features exposure to more than 15 airline equities, and that doesn’t include the ETF’s holdings in several airport services providers. Nor does that figure include the fund’s 4.64% allocation to Boeing (NYSE:BA), the largest maker of commercial aircraft.

Translation: JRNY is more than adequately positioned to capitalize on what could be a solid airline equity rebound as 2022 unfolds.

“Our global outlook for passenger airlines remains positive, despite recent events. We expect passenger volumes to snap back strongly through 2022 and into 2023, which drives our positive industry outlook,” adds Moody’s. “There remains tremendous pent-up demand for air travel, be it leisure, long-haul international or business. In the US, for example, the Transportation Security Administration reported that the volume of travelers passing through airport checkpoints this holiday season ran at about 85% of 2019 levels.”

Over the near term, the primary drag on airlines will be coronavirus protocols, such as proof of vaccinations or negative test results. However, that could be offset by a rebound in business travel, which some analysts believe will occur in the second half of the year. Moody’s says that for the 20 airlines it covers, revenue could increase more than 60% this year to $275 billion.