You are at:Home»ETF Building Blocks Channel»Drug Price Debate May Not Hinder Biotech ETFs After All 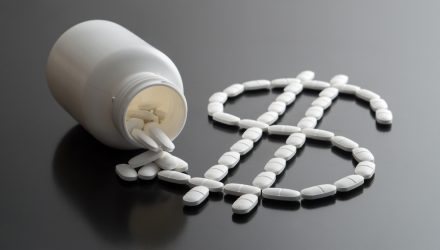 Drug Price Debate May Not Hinder Biotech ETFs After All

The issue of pharmaceuticals pricing reform — a long-time favorite discussion on Capitol Hill — is gaining momentum, and some healthcare assets are bearing that burden.

For example, the ALPS Medical Breakthroughs ETF (SBIO) is lower by 2.35% over the past week as investors fret about the specter of price regulations in the biotech space, which are seen as a roadblock to research and development efforts.

Due to the current political landscape, namely Democrats’ thin congressional majorities and the power of some moderate senators from that party, the drug pricing debate may not go too far, and that could be a positive for exchange traded funds like SBIO.

“While price negotiation can take many forms, we haven’t seen a proposal that we believe is moderate enough to pass the razor-thin Democrat majority in the Senate and also be ambitious enough to gain the support of more progressive Democrats in the House,” says Morningstar analyst Karen Andersen in a recent note.

When headwinds aren’t howling, SBIO is one of the more compelling biotechnology ETFs. Its components’ market value is capped at $5 billion when those stocks are added to the fund’s underlying index. Additionally, SBIO components are required to have at least one drug or treatment in Phase II or III trials.

Those are usually favorable traits, but they also invite regulatory scrutiny because novel and revolutionary drugs and therapies — the very type that SBIO components are working on — often invite pricing scrutiny from regulators. Andersen says that this scenario may not be all that bad in the current drug price debate.

“We don’t expect any changes to fair value estimates or moat ratings for our biopharma coverage. We continue to expect innovative drugs will carry strong pricing power, a core pillar in the valuations and moat ratings for the industry,” said the Morningstar analyst.

Even if the drug price debate gains momentum, SBIO components that already have drugs on the market might be able to offset potential headwinds because politicians are likely to focus on Medicare pricing power, not how pharmaceuticals are priced in other market segments.