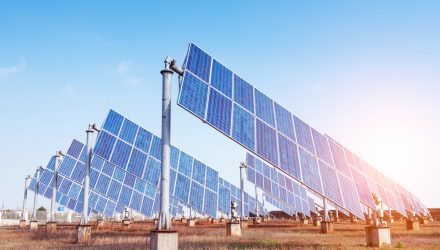 Consumer Savings Could Be Boon for Alternative Energy ETFs

Declining costs are facilitating increased adoption and that’s been one of the primary drivers of success for renewable energy ETFs, including the ALPS Clean Energy ETF (ACES), dating back to last year.

However, lower production costs for solar panels, wind turbines, and the like aren’t the only cost catalyst for ACES. The notion of lower costs for consumers on their monthly power bills could usher in the next frontier of upside for alternative energy stocks.

“Duke Energy Corp., the nation’s largest electric utility, says it can cut greenhouse gas emissions more than 70% in the next 15 years in North and South Carolina — but doing so could cost customers up to $58 a month,” reports David Baker for Bloomberg.

The issue is can those price points eventually come down for consumers.

“The cheapest option – adding new gas plants, solar and batteries to the grid – would cut emissions 53% below 2005 levels by 2035 and boost monthly bills by $21 for residential customers of Duke Energy Progress, one of the company’s two utilities in the region,” according to Bloomberg. “The most expensive, blocking all new gas plants, would reduce emissions 73% and add $58 per month.”

If power providers are able to manage costs passed along to consumers and, better yet, lower those fees over time, the benefits could be considerable for ETFs like ACES.

Obviously, there are various inputs in utilities bills across the country, but the average American household spends almost $2,100 a year on utilities, according to EnergyStar.gov

There were a lot of bright spots in the markets during 2019, but energy couldn’t power its way through to higher gains compared to other sectors. However, as more initiatives towards clean energy become a higher priority, renewable energy sources could help drive strength in the sector. Adding to the case for renewables are robust long-term spending projection. Just look at the numbers required in the Carolinas to move those states away from coal and natural gas to renewable sources.

All scenarios in that region would “require massive infrastructure investments in new power plants and transmission lines. The least expensive option would call for nearly $80 billion in revenue through 2050, while the most expensive would require $108 billion,” reports Bloomberg.