You are at:Home»ETF Building Blocks Channel»Buybacks Could Spark More Gains for Midstream Assets 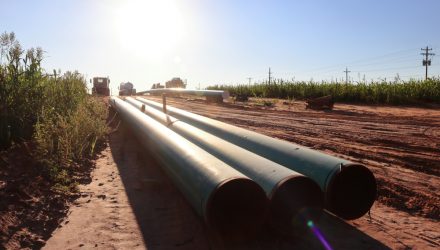 Master limited partnerships and the ALPS Alerian MLP ETF (NYSEArca: AMLP) are benefiting from the energy sector’s resurgence. More catalysts loom in the form of shareholder rewards, including buybacks.

AMLP seeks investment results that correspond generally to the price and yield performance of its underlying index, the Alerian MLP Infrastructure Index. The index is comprised of energy infrastructure MLPs that earn a majority of their cash flow from the transportation, storage, and processing of energy commodities.

Stock buybacks were a common theme at the tail end of the bull run just before the pandemic took hold of the capital markets. In the midstream energy space, these buybacks are showing signs of life again.

“While the number of companies with buyback programs has not changed significantly since mid-November, there was notable repurchase activity in 4Q20, particularly from companies that announced buyback programs earlier in the quarter. Of the combined $322 million spent on repurchases in 4Q20 by the companies below, $224 million or approximately 70% was spent by those companies that announced buyback authorizations in October and November 2020,” notes Alerian analyst Stacy Morris.

AMLP and MLPs at large are usually thought of as high-yielding instruments, but buybacks are useful too. They reduce the number of shares an operator has to pay dividends on, potentially firming up payout safety. Additionally, buybacks are more tax efficient for investors than dividends,

“For midstream investors, it is positive to see companies supporting equity prices in the ongoing recovery by executing on buyback programs as a means of returning cash to shareholders beyond generous dividends,” adds Morris.

“Motivations for investors holding AMLP are likely to include beliefs that the country’s basic infrastructure requires further investment, that these companies will continue to be able to tap capital markets effectively, that fuel demand will stabilize or start growing going forward, and that interest rates will not dramatically increase,” Morningstar analysts write.