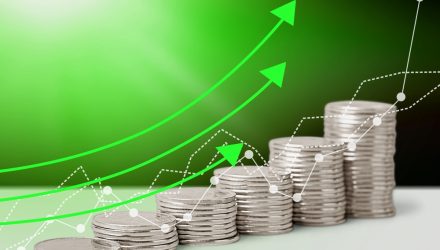 Equities – and particularly the growthiest segments of the market – staged a recovery rally last month despite data showing increasing headwinds for the U.S. economy, including GDP decline for the second consecutive quarter, persistently high inflation, and slowing earnings growth.

The three most popular funds in ALPS’ range of ETFs by net inflows in previous months all offered dividends, but this month, while dividends maintained their hold, investors looked to capitalize on the temporary weakness observed in the energy markets from mid-June until early July when markets rebounded.

AMLP took in $94 million in net inflows during the month, placing it on top for the first time this year. AMLP saw $157 million in net outflows the previous month and has $6.5 billion in assets under management.

AMLP tracks a benchmark that offers exposure to MLPs that each earns at least 50% of EBITDA from assets that are not directly exposed to changes in commodity prices. MLPs have attracted significant interest for two primary reasons: (1) required quarterly distributions provide a steady stream of current income, and (2) because they are partnerships, MLPs avoid corporate income taxes at both the federal and state level. The tax liability is passed through to the individual partners, according to VettaFi.

By generating at least 90% of income from natural resource-based activities such as transportation and storage, an entity can qualify as an MLP and not be taxed as a corporation. So the IRS treats shareholders of an MLP as partners, making the MLP itself a pass-through entity. That means that taxes are avoided at the corporate level, and investors avoid the double taxation of income. AMLP holds all of its assets in domestic equities, offering a pure play on the U.S. MLP sector.

The ALPS Sector Dividend Dogs ETF (SDOG) fell to the second spot, taking in $8 million in net inflows in July compared to $19 million in June inflows. SDOG has $1.2 billion in assets under management.

This ETF offers exposure to a strategy that is largely similar to the “Dogs of the Dow” approach, which involves a portfolio consisting of the 10 components of the Dow Jones Industrial Average with the highest dividend yields. SDOG, however, casts a much wider net by drawing from the S&P 500 as its universe of potential stocks.

The fund maintains equal allocations to each of 10 sectors, unlike many dividend-focused products, including the First Trust Morningstar Dividend Leaders Index Fund (FDL) and the iShares Core High Dividend ETF (HDV). The portfolio also consists of equal weighting to each component stock.

ENFR moved to third place, taking in $4 million in net inflows for the month, and similarly to AMLP, making it to the leaderboard for the first time this year. The fund has $121 million in assets under management.

ENFR provides exposure to the AMEI Index, a composite of North American midstream energy infrastructure companies, including corporations and MLPs, engaged in the pipeline transportation, storage, and processing of energy commodities, according to SS&C ALPS Advisors.

ENFR combines MLP exposure with MLP affiliates and other energy infrastructure companies. For RIC compliance, limited partnership units are allocated a fixed 25% of the portfolio.

To be eligible for inclusion in the underlying index, companies must have their principal office in the U.S. or Canada and earn the majority of their cash flow from qualifying midstream activities, such as gathering and processing, liquefaction, pipeline transportation, rail terminaling, and storage

Additionally, companies must meet minimum liquidity requirements for a certain period to be eligible for inclusion in the underlying index, according to VettaFi.