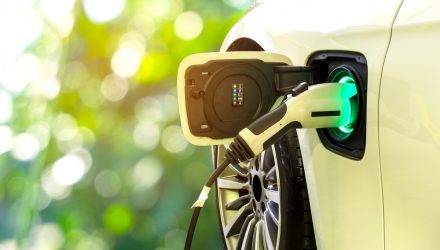 On Wednesday, California Gov. Gavin Newsom said the state will ban sales of internal combustion engine vehicles starting in 2035, a move that’s widely viewed as a boon for the still-nascent electric vehicle industry.

For Californians and investors, Newsom’s announcement has implications beyond the obvious of higher electric vehicle sales. Assuming a massive supply of electric vehicles hits the roads in the Golden State, the state’s electrical grid, as it was this summer, could be taxed unless the state makes necessary infrastructure investments.

Investors can capitalize on that theme with ETFs, including the ALPS Disruptive Technologies ETF (CBOE: DTEC). DTEC is a diversified technology ETF exposure to 10 disruptive themes, one of which is smart grid technology.

“One clean energy trade group in California is warning that California’s bold new goal of phasing out gas-powered cars within 15 years will drive up power demand from electric cars by 25% — a potential problem for a state that has been struggling to keep the lights on,” reports David Baker for Bloomberg.

Smart Grid consists of controls, computers, automation, and new technologies and equipment working together, but in this case, these technologies will work with the electrical grid to respond digitally to quickly changing electric demand brought on by increased variability due to solar and wind power. The Smart Grid represents an unprecedented opportunity to move the energy industry into a new era of reliability, availability, and efficiency that will contribute to our economic and environmental health.

Electric vehicles or otherwise, California should be ground zero as a proving ground for the benefits of increased smart spending. Assuming that spending happens, DTEC could prove to be one of the few credible ETF beneficiaries of that trend.

As billions go into updating and fixing the nation’s aging infrastructure, investors now have the opportunity to capitalize on the ambitious “smart grid” revolution with the use of DTEC. With increased adoption of renewable energy, there’s long-term opportunity with DTEC.

“With record-breaking heat triggering California’s first rolling blackouts in 20 years last month, the state is already grappling with an energy crisis that critics have been quick to pin on its lofty climate ambitions. Intermittent solar and wind power generation have surged on California’s grid, making it more difficult to forecast supplies in real-time,” according to Bloomberg.