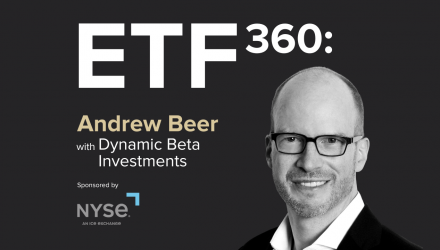 Managed futures have seen a surge of interest in 2022. Beer noted that the iMGP DBi Managed Futures Strategy ETF (DBMF) has gone from a $65 million AUM fund to about $430 million. “The demand has really been driven by the fact that, during the first half of this year, the whole managed future space did really well,” Beer said, pointing to managed futures being up 20% during a period where the S&P was in a bear market, and bonds were tanking.

With the 60/40 portfolio seeming to no longer be the skeleton key it once was, Beer said, “I think you have thousands of advisors who are saying ‘where can we get diversification?'”

Rosenbluth asked what role managed futures play in a portfolio. Beer responded, “What we say about managed futures is that it has more diversification bang for the buck than just about any other strategy you could find.” Given that it has zero correlation to stocks and bonds, it is an appealing product for quants and model portfolio builders. “What got us interested in this space is called ‘crisis alpha.'” According to Beer, the 20% performance during the latest rough market period is no outlier. Historically, managed futures do very well when they are needed most. “It should be in everybody’s portfolio,” Beer said.

Remarkably, it is barely a blip in the ETF world. Beer sees this as a failure on the education front, one he hopes his firm will push against.

Beer calls his strategy a hedge fund replication strategy. “We’re not trying to be smarter than the smartest guys that do this. Rather, all we’re saying is, if we can use our own ways to figure out how they are positioned, copy it cheaply, and put in an ETF; we can transport the benefit they provide to institutional investors and billion-dollar family offices and bring that to the much broader asset management world that invests through ETFs,” he said.

Speaking about why the product is actively managed, Beer said, “there is no index like the S&P 500 that you can invest in and get exposure to managed futures.” He continued, “because there is no index, there is no way to really vanguard the space. The closest you can get is by doing what we do.”