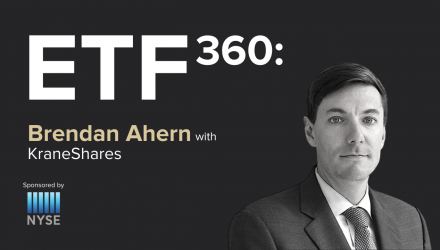 For this week’s episode of ETF 360, ETF Trends CEO Tom Lydon and CIO Dave Nadig spoke with Brendan Ahern, CIO of KraneShares, discussing the current climate in China and the strategy behind $KSTR.

As Ahern makes clear, China is actually three-quarters in front of the United States as far as opening back up. Following a strong quarantine in the first quarter, the current state, as based on the Q4 earnings statements, hints at good things to come.

“China’s almost like a tell in poker,” Ahern states. “Because China’s a little bit further ahead of the rest of us, we kind of know how things are going to play out.”

Narrowing down to how KraneShares delves into the China market, there’s more to say about their newly released products. Having just launched the KraneShares SSE Star Market 50 Index ETF (KSTR), which tracks the STAR Market, Ahern has reason to believe that it’s something to care about. The STAR Market is a newborn part of the Shanghai Stock Exchange (SSE) that is geared toward allowing innovative growth companies to come to market.

“Like many countries, China has lots of needs from a technology perspective,” Ahern continues. “So, the STAR Board is there to provide a venue, predominantly with technology companies, biotech companies, etc., which come to market, and fund their growth by raising capital via an IPO so they can put that into research and development.”

When it comes to IPOs, SPACs, innovative technology, etc., China is in a great place for investment bankers. Some of this has to do with U.S.-listed Chinese companies being re-listed in Hong Kong, where investors know and recognize those companies at the same time as mainland China. Meanwhile, in mainland China, last year, 47% of all the capital raised via IPO was done on the STAR Board.

“Clearly, the STAR Board is taking this leading role of being where companies are going to be listing in mainland China,” Ahern notes.

There’s a path where the percentage China has of the MSCI of emerging markets could grow to around 60%. The capital markets growth is a large part of this, and the trend is likely only going to continue.

Speaking to the companies that are listed in the STAR Market,  Ahern believes that as these firms go public, they are being added to other benchmarks due to the STAR Board being a part of the SSE, which, in turn, adds them to the Shanghai Composite.

“We just had some of these companies added to the Stock Connect. Stock Connect is the trading venue that allows foreign investors to go into China. The first batch of STAR companies were approved for Stock Connect trading,” Ahern explains. This maturing graduation is reminiscent to how companies in the U.S. progress over time as well.