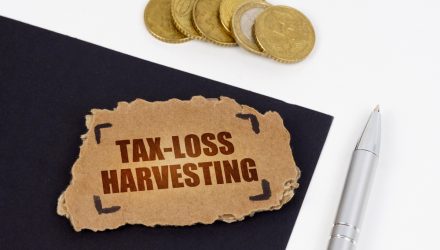 It’s not quite tax season, but with year-end right around the corner, it could be an ideal time for advisors to discuss the benefits of tax loss harvesting with clients.

The idea could be particularly relevant for clients and investors — and there are probably plenty — who are saddled with losses on various fixed income products, including exchange traded funds. Put simply, tax loss harvesting is the act of selling a losing position to gain the benefit of a possible tax deduction and using the proceeds to move into another asset at a later date.

With so many passive bond funds slumping this year, advisors and investors may want to consider harnessing tax loss harvesting to depart those funds and move into an active ETF such as the SPDR DoubleLine Total Return Tactical ETF (TOTL).

Though not perfect, TOTL has spent a significant portion of this year outpacing the widely followed Bloomberg US Aggregate Bond Index, which serves as the benchmark for some popular passively managed bond funds. The $2.09 billion TOTL attempts to beat that benchmark.

TOTL “places a heavy emphasis on mortgages relative to its benchmark of the Agg, which have historically been less volatile and more efficient in generating yield relative to other investment-grade bond sectors,” wrote Matthew Bartolini, head of SPDR Americas Research. “The fund has had lower drawdowns than its peer group median in 91% of rolling six-month periods since inception.”

TOTL, which debuted in 2015, holds 1,1184 bonds with an option-adjusted duration of 5.84 years, putting it in intermediate-term territory. That’s a relevant point to investors considering the ETF because intermediate-term bonds are usually the least correlated to equities, indicating that TOTL may offer more diversification benefits than a long-dated counterpart.

Additionally, as an actively managed ETF, TOTL can be more responsive to current market conditions than a passive competitor. That’s evident by the fund’s current conservative posture.

“TOTL’s defensive positioning also has led the fund to perform well relative to its peers, ranking in the 13th percentile of Intermediate core-plus bond funds on a trailing-one year basis. TOTL is outperforming its benchmark on a YTD basis by +172bps,” concluded Bartolini.

TOTL’s holdings have an average maturity of nine years and the fund offers a yield of 5.34%, which is arguably eye-catching when considering that nearly 53% of the portfolio is rated AAA, according to issuer data.