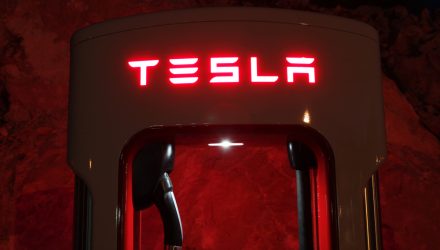 Tesla (NASDAQ:TSLA) is one of the world’s dominant makers of electric vehicles, and its brand is synonymous with such vehicles.

After all, Tesla doesn’t make internal combustion engine cars, and it’s largely viewed as a luxury brand with the prices to match. Considering those points, Tesla is relevant to a slew of exchange traded funds, including the SPDR Kensho Clean Power ETF (CNRG). CNRG allocates 2.69% of its weight to Tesla stock — by no means excessive.

However, CNRG is relevant in the Tesla conversation for multiple reasons, including the point that Tesla’s success could be a rising tide that lifts other electric vehicle makers. Additionally, some CNRG components have other EV inroads.

“Tesla’s market share results in the first half of 2022 are equally strong. With 20.5% share of the luxury market, Tesla share is more than 6 percentage points above that of runner-up BMW. Tesla’s June 2022 new registration volume of just over 50,000 units represents the first time in (at least) the last 10 years that a luxury brand has registered more than 50,000 new vehicles in one month. In fact, the 40,000 threshold per month has only been surpassed four times in 10 years – three times by Tesla and once by BMW,” according to IHS Markit.

Those data points indicate that Elon Musk’s company will retain dominant share in the electric vehicle realm, particularly in the luxury segment. Still, the complexion of domestic and global EV sales will change with time, and that could be to the benefit of clean energy ETFs such as CNRG.

“However, the U.S. luxury landscape is changing, and three newcomers have shown, in their early days, their ability to conquest Tesla owners. As the three charts below indicate, the number one brand conquested by each of Lucid, Polestar, and Rivian in the first six months of 2022 is Tesla,” added IHS Markit.

Rivals taking market share from Tesla, assuming it happens, isn’t necessarily a negative for a fund such as CNRG. Rather, increased EV adoption — regardless of brand — is a potential positive for clean technology ETFs because more EVs on the road increases the need for products and services purveyed by CNRG member firms. Still, Tesla loyalty is something to behold, and that’s a plus for CNRG, too.

“Tesla brand loyalty (the propensity of return-to-market Tesla households to acquire another Tesla) has climbed to 67.5% in the first half of 2022, more than 12 percentage points higher than its brand loyalty in any preceding year (its next highest result was 55.2% in 2020),” concluded Markit.