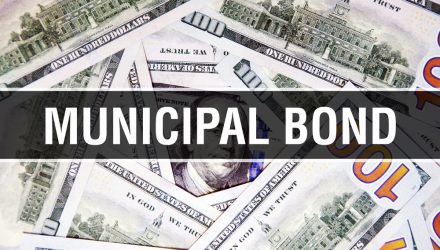 Municipal bonds have been dragged lower with the broader fixed income market this year thanks to the Federal Reserve’s scorched earth campaign of raising interest rates. However, some market observers believe munis are offering value and tempting levels of income, indicating the segment could figure prominently in a bond market rebound. Investors can get into the game while embracing environmental, social, and governance (ESG) principles with the SPDR Nuveen Municipal Bond ESG ETF (MBNE).

MBNE currently sports a 30-day SEC yield of 3.25%, which is an impressive level of income considering the fund’s high credit quality. That’s also within the 3% to 5% range that investors can find on a slew of municipal bond funds today, but there’s even more to the MBNE story.

“The benefits after taxes are even greater. A 5% muni offers a tax-equivalent yield of almost 8% for individuals in the top 37% federal tax bracket—5% divided by 0.63—roughly equal to the rate on junk bonds. The tax edge can be greater for affluent residents of high-tax states like California and New York, because in-state bonds are exempt from state and local taxes,” reported Andrew Bary for Barron’s.

In a normal fixed income environment, MBNE sporting a yield of 3.25% might seem too good to be true or signal cause for concern. However, 2022 is anything but normal for bonds, and MBNE’s yield is delivered with about 86% of its holdings rated AAA, AA, or A.

“High yields often signal credit risk, but that’s not the case now. The selloff in munis was exacerbated by historically low yields at the start of the year, before the Federal Reserve began raising interest rates. A 5% muni still yields less than the trailing 12-month 8.2% inflation rate, but the markets are discounting sub-3% inflation over the next five and 10 years,” added Barron’s.

History is also on MBNE’s side. While the fund itself isn’t old — it’s actually new, having debuted in April — history indicates that when municipals tumble, impressive rebounds often follow. The exchange traded fund is actively managed, indicating it could position for a recovery more rapidly than passive rivals.

“Even better, the high yields aren’t a sign of financial stress. State and local governments are flush with tax revenue, while credit-rating upgrades have exceeded downgrades by a 3 to 1 margin this year. A recession could dampen the outlook, but, historically, less than 1% of munis have defaulted each year,” according to Barron’s.