You are at:Home»ESG Channel»Electric Vehicles Could Make Up 50% of Total Car Sales by 2030 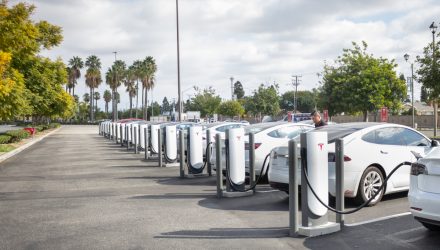 Major automakers are making changes backed by the Biden administration, pledging that half of all cars and light trucks sold in the U.S. by 2030 will be either electric, hydrogen-fuel cell, or plug-in hybrid vehicles.

General Motors Co., Ford Motor Co. , and Chrysler maker Stellantis NV will be aggressively pushing out cleaner fuel vehicles and stated that their green commitment will be contingent on federal funding for manufacturing and supply-chain research and development, purchase incentives, and a national electric vehicle charging network, the Wall Street Journal reports.

“This industry’s going to spend $330 billion over the next five years on electrification alone,” John Bozzella, president of the Alliance for Automotive Innovation, the lobbying group for auto makers and suppliers, said at a conference. “Even in Washington, D.C., that is real money.”

Fleet standards were at an average 54.5 miles per gallon under the Barack Obama’s administration, but they have been cut to 40 mpg under former president Donald Trump.

The shift away from gasoline to electric vehicles will help automakers adjust to the tougher fuel-efficiency standards. Companies, though, stated that the voluntary targets for electric vehicle sales “can be achieved only with the timely deployment of the full suite of electrification policies committed to” by the administration, with a $1 trillion infrastructure plan moving through Congress.

The Senate infrastructure spending bill would allocate $7.5 billion to states and municipalities to pay for vehicle charging stations.

Electric vehicle sales have only made up about 3% of the total U.S. car market for May and June. Looking ahead, auto makers want electric, fuel-cell, and plug-in hybrid vehicles to make up 40% to 50% of sales by 2030, arguing that the action “represents a dramatic shift from the U.S. market today.” Biden administration officials, though, said the president could sign an executive order to keep the target at 50%.

“The chances this industry can smoothly ‘pass the baton’ from ICE to EV without a major disruption in margins is remote,” Morgan Stanley analyst Adam Jonas said in a note, referring to internal combustion engines.