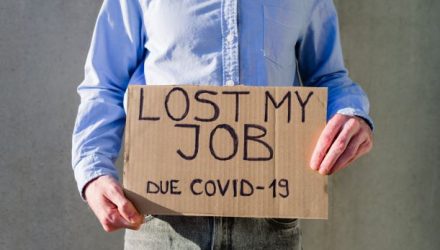 Ian Young April 23, 2020
Benchmark stock indexes are rallying once again on Thursday despite a surge in unemployment claims.
The Dow Jones Industrial Average is up 1.45%, while S&P 500 has climbed 1.29%, and the Nasdaq Composite has added 1.4% as of almost 1 pm EST. The three bell-weathers rallied are Wednesday as well, optimistic that oil price, which is continuing higher today, were stabilizing.
Index ETFs that follow the stock indices are making gains Thursday as well. The Invesco QQQ Trust (NASDAQ: QQQ) has rallied 1.33%, the SPDR Dow Jones Industrial Average ETF (NYSEArca: DIA) has added 1.48%, and the SPDR S&P 500 ETF (NYSEArca: SPY) has climbed 1.4%.

With much of the country still on lock-down, as government regulators seek to find a solution to the coronavirus pandemic, which has ravaged the economy and taken the lives of more than 187,000 people worldwide, it has taken just five weeks for the U.S. economy to eliminate all the job gains it added over the last 11 years.

Despite the massive jobless data, the White House is optimistic that a path to recovery is in the works.

“We are facing an unforeseen enemy and today’s report continues to show that these are challenging times for many Americans who want to get back to work,” Judd Deere, a White House spokesman, told CNBC.

“Because of President Trump’s leadership and the American people’s commitment to slow the spread, we are on a data-driven, responsible path to opening up America again,” he added. “As we begin the phased approach, the Administration continues to move quickly to provide the benefits under the CARES Act that workers, families, and small businesses across the country need.”

Along with the four previous jobless claims reports, the tally of Americans who have sought unemployment over the previous five weeks has reached 26.45 million, a total that beats the 22.442 million positions added to nonfarm payrolls since November 2009, when the U.S. economy started to grow the number of jobs again after the Great Recession.
“These are staggeringly big numbers. But the fact that the initial claims data has moderated for three consecutive weeks now should be seen as a positive for risk assets,” said Shaun Osborne and Juan Manuel Herrera, currency strategists at Scotiabank, in a note.

“As the economy begins to reopen in May, whether the local shop or the factories that are lining up to do so in the coming weeks, we’re likely seeing the peak in claims as people get back to work,” he wrote in an email. “Again, the pace at which they will is the question.”