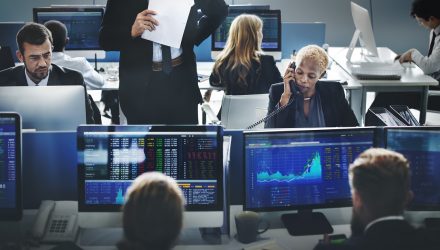 A yield curve inversion is when short term bonds yield more than long term bonds. Why is that bad? It’s usually the other way around.

So far the Dow Jones Industrial Average has dropped 2.4% today, while the S&P 500 has fallen 2.44% (71.35 points) and the Nasdaq Composite has declined 2.8% (224 points). The CBOE Volatility Index (VIX), aka Wall Street’s fear gauge, jumped to a high of 22 on Wednesday, up from under 12 late last month, signalling investors are frantic.

Bank stocks and ETFs are driving the selloff as it gets more challenging for the sector to make a profit lending money in such an environment. Key players Bank of America and Citigroup fell 4.3% and 5.1% respectively, while J.P. Morgan also dropped 3.6%. The SPDR S&P Regional Banking ETF (KRE) is down 2.65%.

There is often a substantial lag between when the yield curve inverts and when a recession occurs though, with as much as nearly 2 years in-between, to as little as 8 months. This confuses investors, who likely see everything as stable.

Related – Equity Strategist: “The Bear is Alive and Kicking”

Ahead of the last recession, the yield curve inverted briefly as early as December 27, 2005, about two years before the financial crisis sent the economy into recession.

For over a year after that, the yield curve fluttered in and out of inversion. The last inversion, as measured by U.S. Treasury data collected by the St. Louis Fed, was in 2007.

“Historically speaking the inversion of that benchmark yield curve measure means that we now must expect a recession anywhere from six-to-18 months from today which will drastically, and negatively, shift our medium-to-longer term outlook on the broader markets,” Tom Essaye, founder of The Sevens Report, said in a note on Wednesday.

The good news for ETFs investors fearing a recession is it means there is time to plan out investment strategies accordingly, allocating to ETFs that are traditional safe-havens like gold using the SPDR Gold Trust ETF (GLD) which is up 1.5% today and nearly 20% since June, as investors flee the stock market for safety.

While there may be some continued downside for the market to weather in the future, investors can also profit from the decline using leveraged inverse ETFs like the Direxion Daily S&P 500 Bear 3X ETF (SPXS), which offers investors with a bearish view of the market a chance to trade the downside.

When U.S. stocks tumble, another strategy is to look at market neutral strategies ETFs, such as this Anti Beta ETF from AGFiQ.