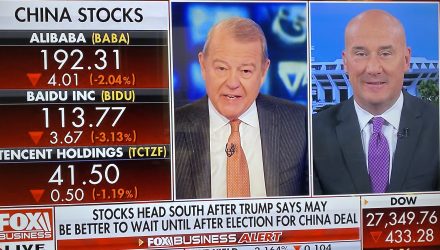 Speaking with Stuart Varney on Fox Business Network on Tuesday, ETF Trends CEO Tom Lydon talked about how a holdout in making a deal with China could be the smart play for the U.S.

With the Dow down Tuesday likely due to the possibility of more Chinese tariffs arriving on December 15, no United States-Mexico-Canada Agreement (USMCA), despite all of the pressure, and maybe even tariffs on French luxury goods, the market does not have a lot to like currently.

Getting a better sense of understanding the market sell-off, described by some on Wall Street as an early Christmas gift, Lydon explains how it’s about positioning.

“President Trump is a master negotiator,” Lydon states. “Him sending a message to China today to say ‘I can put off trade negotiations for a year,’ isn’t going to affect the market that much. We know that.”

As Lydon adds, Trump stands firm in saying he holds all of the cards. This means a 2 or 3% correction in the stock market is a buying opportunity for most investors currently.

With Varney noting the terrific run-up from September to now and wondering about using the current market sell-off as a means to buy, Lydon notes how there is a significant shift on.

“You know that we watch the flows in ETFs, and we’ve seen a shift, lately, from growth stocks over to value. So there’s a great opportunity in value stocks. Also, small caps, compared to large caps.”

Lydon goes on to explain how the S&P 500 has six stocks that represent 18% of the overall holdings, while the bottom 300 holdings in the S&P also hold 18%. So, now people are starting to see the shift-on, as investors are saying how they don’t want to exit the market, but they do want to get into more value-oriented stocks, which can be done by buying more small caps.

Based on how things are, one could even get holiday sale where, from a valuation standpoint, the stocks are 20 – 30% off.