You are at:Home»Core Equity Channel»Stocks Stumble On Trade Deal Delays 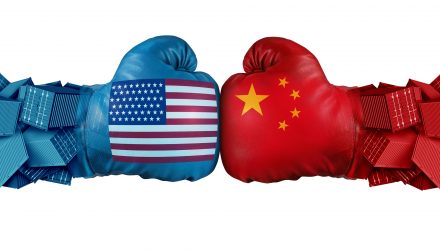 After a robust run-up above the recent highs of the summer, markets are pulling back some again today as investors are once again on edge over trade deal delays.

Stocks slumped overnight and on Wednesday after a report from a key Trump official noted that President Donald Trump and Chinese leader Xi Jinping likely wouldn’t meet to sign a trade deal until December, disappointing news for a market that has rallied considerably on promises of a trade deal, and potential end to the protracted trade war with China.

The Dow Jones Industrial Average dropped about 43 points, or 0.2%, while the S&P 500 was off about 0.1%. The Nasdaq Composite fell 0.5% as big tech companies, including Amazon, Microsoft, and Facebook, all showed weakness. This drop came after the Dow Jones hit another record close on Tuesday.

Dozens of venues have been suggested for the trade meeting, which had initially been scheduled to take place on the sidelines of a now-abrogated mid-November summit of Asia-Pacific leaders in Chile, the official said.

One Chinese official said Beijing was considering the possibility of a meeting in Greece, where Xi is set to visit this Sunday.

When Will The Deal Be Complete

Part of the concern for investors is that the more this deal is postponed, the less likely it is to be completed say experts.

“It’s longer than they wanted, and the longer it stretches out, the greater the risk it blows up,” said Art Cashin, director operations at UBS.

The meeting between Trump and Xi could be postponed as the two sides still need to determine the terms and location, Reuters released Wednesday, citing a senior Trump administration official. The report also said it’s still possible the two countries will not reach a trade pact, which is the worst-case scenario for investors.
Despite President Trump claiming that a “phase one” deal was all but in the bag, Donald Straszheim, Evercore ISI head of China research, said Wednesday Xi is not coming to the U.S. as “mistrust dominates.” China is reportedly urging Trump to remove more tariffs imposed in September on around $125 billion worth of Chinese goods before making any moves.
Stocks had been on a roller-coaster ride throughout the summer, but volatility has contracted recently, with the VIX trading consistently below 13-14. The longer the market is left waiting for a trade deal, the more likely it is possible that the market could come unraveled.
“If there is one thing we have learned over the last year or so is things can change very quickly,” Mike Loewengart, vice president, Investment Strategy at E*TRADE Financial Corp, told Reuters. “The sentiment is optimism on account of the hopes that there will be some progress on the trade front, coupled with some encouraging economic metrics that reinforced the strength.”
For more market trends, visit  ETF Trends.