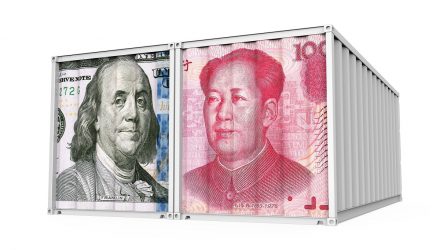 In the latest episode of the vacillating trade news that has now become almost commonplace, there is now a much greater likelihood that U.S. and China trade talks will occur next month, according to Chinese sources who seem to have inside knowledge on the trade war. U.S. stocks rocketed higher Thursday on the news.

China’s Ministry of Commerce confirmed the United States and China participated in a phone call Thursday and agreed to meet in early October in Washington. This would chronicle the 13th round of trade negotiations after both sides have continued to push tariffs on billions of dollars worth of each other’s goods.

The latest rumors stand in stark contrast surprise tariff announcement that resulted after the U.S. and China restarted trade talks in Shanghai this summer, following the in-person G-20 truce recently, where both parties claimed there would be no foreseeable tariffs. The White House explained at that time, prior to a Trump tweet regarding new tariffs, that the meetings were “constructive,” adding that China reaffirmed the United States’ commitment to enhance purchases of U.S. agricultural exports. Trade negotiations would be put on-hold then, reengaging again in Washington in early September, according to the White House statement.

“Trade talks are continuing, and during the talks the U.S. will start, on September 1st, putting a small additional Tariff of 10% on the remaining 300 Billion Dollars of goods and products coming from China into our Country…We look forward to continuing our positive dialogue with China on a comprehensive Trade Deal, and feel that the future between our two countries will be a very bright one!” Trump said in a tweet last month.

Stocks celebrated the latest news that both sides will come back to the negotiating table, with the Dow Jones Industrial Average, S&P 500, and Nasdaq markets all up about 1.5% Thursday.